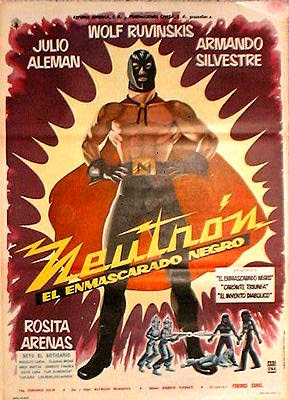 The first Mexican wrestling superhero I ever saw was called Neutron. Neutron was the black masked star of a series of low budget black and white movies filmed south of the border in the early to mid-1960’s. In the early 1970’s, the local UHF channel in Cincinnati ran several if not all of these films (it’s hard to tell as many were similar) and they were unlike anything I’d ever seen. Atmospheric in spots, static in others, they reminded me of the first season George Reeves SUPERMAN episodes at times. The shirtless hero, never seen without his trademark mask, was a superhero who made his living as a professional wrestler. At least twice in every film, the plot stopped dead for a wrestling match! And what plots they were— evil dwarves, clunky robots, mad scientists wrapped up like mummies! They even inspired me to make my Captain Action into a version of Neutron!
Wolf Ruvinskis is credited as Neutron and according to IMDB he really was a Mexican luchador. That said, Neutron has the barest cameo in the new book I’m reading, MONDO LUCHA A-GO GO (watch for a review when I’m finished!) a history of that bizarre world both off-screen and on. Apparently next to the big guns like El Santo and Blue Demon, Neutron was an also-ran as a professional wrestler.
Ruvinskis, however, lists an impressive film career without his mask, also. This is something those other guys never dared do. Apparently, Wolf doffed his black mask in 1965 and went on to become a successful character actor, even appearing in an episode of American TV’s I SPY. His acting career continued until about a decade ago and he died in 1999.
Mexican wrestling movies I’ve seen since are bigger, weirder and certainly kitschier but I’ll always have a soft spot for those long ago Saturday evenings watching Neutron put wrestling holds on mad scientists.
Posted by Booksteve at 1:48 PM