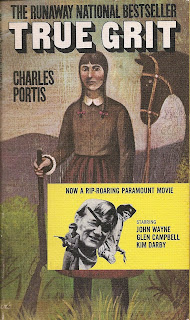 Amongst the other anniversaries this past week, John Wayne would have been 100 years old! Kind of hard to believe. Wayne had grown from a utility actor in B Westerns to a full fledged A list movie star to a virtually review proof film icon by 1969. He was big, he was gruff, he was John Wayne. Past the fifties, that's pretty much all the Duke was allowed to be in movies and it seemed like enough to us fans. In 1969, however, director Henry Hathaway encouraged or allowed Wayne to do something different and he did. The book TRUE GRIT (front and back covers of the movie tie-in papernack seen here) had been a modest hit but the movie became a true event. John Wayne, perhaps for the first time in a decade, was not playing John Wayne-He WAS Rooster Cogburn, a half blind, whisky swilling, washed up, fat old lawman. In a bit of stunt casting, singer Glen Campbell, then at the height of his TV fame, plays a Texas ranger. He's not horrible but in this film he's completely overshadowed by Wayne's bravura performance. That said, young Kim Darby, giving a very mannered performance as the young woman who hires Cogburn because he has the title "true grit," keeps up every step of the way in what would inexplicably turn out to be her one real shot at the big time. Wayne got the Oscar for best actor that year and smiled ear to ear. You could say it was perhaps for his whole career but then you see the 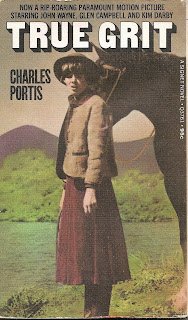 performance again and realize that no, this guy deserved it! After TRUE GRIT, Duke reverted to type, playing his stock character in westerns and police potboilers for another five years or so before another turn at Rooster and then the self conscious eulogy for the western film that was THE SHOOTIST. After that rather obvious ending, in spite of talk of more movies, John Wayne retired to deal with cancer. He died in 1979, ten years after his most public triumph. Watch for Wayne's movies all over the TV this weekend but particularly on Encore's Western channel.
Posted by Booksteve at 5:45 AM