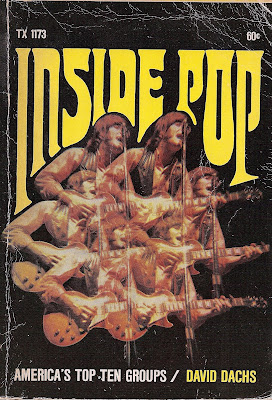 This 1968 Scholastic book, INSIDE POP, was sold exclusively in schools. Author David Dachs gives a chapter of background on the constantly changing musical scene of the times, then devotes individual chapters to his choices for the top ten American groups of the period (apparently in no particular order). It’s an interesting list:
The Lovin’ Spoonful-John Sebastian and crew certainly deserve their Hall of Fame status but are remembered today mostly for their oldies station standards rather than for the folk-rock pioneers they were.
The Mamas and the Papas- A major force behind the California sound and also the instigators of the Monterey Pop Festival, they’re also primarily remembered as oldies station fodder sadly.
Diana Ross and the Supremes-Diana the ultimate Diva songstress, presented here arguably at the peak of the group’s popularity. They would hold onto their legend status even as they inspired DREAMGIRLS but few today can probably name the other (equally talented) ladies. An acquaintance of mine heard Mary Wilson speak and sing just recently and was blown away by her talent and beauty. Diana’s personal legend has not fared so well.
The Beach Boys-In spite of their sad deterioration, Brian Wilson has emerged as one of the true innovators and survivors of the sixties. Told here is the rise to fame of the group itself with hints and snippets about Brian and his move to behind the scenes and "avant garde" music.
The Four Seasons-In 1964 they were big enough for someone to fake up a BEATLES VS. THE FOUR SEASONS album but, if you’re like me, the group’s street corner style never set well in the sixties and that falsetto of Frankie Valli’s holds up even less today. I’ll switch to Fergie if I hear BIG GIRLS DON’T CRY on the radio these days!
Paul Revere and the Raiders-Hard to believe this gimmicky band was popular enough to make the top ten! Not quite a manufactured band but their behind the scenes associations with Dick Clark undoubtedly boosted their stock. They were all over TIGER BEAT and SIXTEEN but I mean, seriously, can you even name one of their hits besides KICKS? You don’t even hear these guys on the oldies station anymore!
Sonny and Cher-Still a few years away from their hit middle class TV variety show, they were on the surface the quintessential hippie couple. In actuality, of course, the savvy (but not all that hip) Sonny was Cher’s Svengali, taking her out of her shell and making her a star. Always ambitious, Sonny surprisingly found his way into Congress while the ageless Cher attained legendary Diva status and is now in year sixteen or so of her incredible farewell tour of the galaxy!
Simon and Garfunkel-One mousy little poet with delusions of grandeur and a tall frizzy-haired singer with the voice of an angel was hardly the ultimate teen dream but these two proved their brilliance over and over and are rightfully placed high in the rock pantheon even today. I couldn’t come up with 150 bucks to see them when they toured with the Everly Brothers a couple of years back but I’m sure they were worth it!
The Monkees-Hah! Maybe now they’re looked down on but in this book, they’re treated like a real rock group which, no matter any argument to the contrary, is what they had become by that point! The Monkees sold records, sold magazines, sold merchandise, got good ratings and sold out concerts. They wrote songs, played their own instruments (more than some other groups anyway!), had groupies, were admired by their peers (including the Beatles) and everybody remembers dozens of their hits. They deserve to be on this list!
The Young Rascals-Many people do recall their songs but not necessarily who did them. Not a day goes by when I don’t hear them on the radio in between Matchbox 20 and Gwen Stefani on those stations that play lighter hits and oldies. Still, as big as their image was on TV in ’68, I doubt the average person would recognize even a vintage clip of the group with the sound turned off.
Overall, INSIDE POP picked a good mix, though. Hard to argue any of the choices really and while there’s always a "But what about…?" this book serves as a nice time capsule of popular music in the public eye at the beginning of one of the most influential years of the twentieth century.
Posted by Booksteve at 5:22 PM