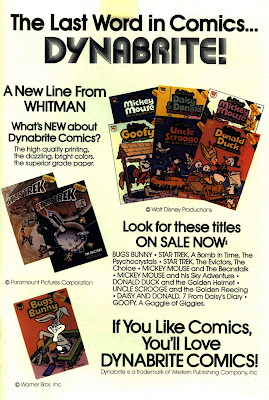 Here's a comic company that I seem to have completely missed. Never seen an issue. From what I've discovered, though, Dynabrite Comics was a Whitman spinoff from the late 1970's that reprinted two previously published Disney, Warner Brothers of STAR TREK comics on better paper with brighter than normal coloring. They retailed for 69 cents at a time when regular comics were still about 50 cents and had cardboard fronts with blank white inside covers. Sort of an early version of Baxter paper comics?
Posted by Booksteve at 11:35 AM