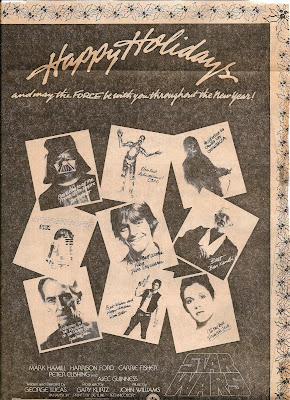 I would be remiss if I didn't say something about STAR WARS before the end of its 30th anniversary month so here we are. I saw STAR WARS (or if you insist, "THE NEW HOPE") 8 times in 1977-78. It opened only at one hard to get to (when you didn't drive) multiplex outside of town so even though I'd been eager for it thanks to smallish plugs in STARLOG magazine for months I had to wait until that first Sunday when I talked my friend Terry into having his mom take us to an evening show. It was packed (which was unusual in those days!) and I remember well the feeling of awe that I got in our tenth row seats when that loooong spacecruiser first moved upscreen. THIS was what I had wanted nearly a decade earlier from that pretentious 2001: A SPACE ODYSSEY! This was entertainment on a grand scale. I loved every second of it! My local theater was locked into playing something else for another month having taken a pass on this STAR WARS thingie. By the time it was hot they were kicking themselves and undoubtedly firing people. Once it did finally open there however it would set new records by running more than a year! As such, just to deviate from the now-classic Hildebrandt poster artwork, we would sometimes see newspaper ads like the tongue-in-cheek one seen here from the Christmas 1977 season 8 months after that opening. My wife tells me that every date she had that year said, "Hey, ya wanna see STAR WARS?" Being the geek I would eventually meet and marry, she of course said yes every time.
Posted by Booksteve at 10:26 AM