Movies That Fell Through the Cracks # 23 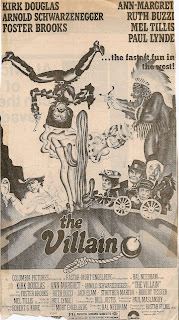 This one hasn’t really fallen through the cracks but it does tend to get overlooked in rental stores and rarely turns up on television. 1979’s THE VILLAIN is a stylized western spoof that was described at the time as a live-action Road Runner cartoon. Kirk Douglas is outlaw Cactus Jack, the Coyote character, whose many attempts at stopping the heroic Handsome Stranger (yes, that’s his name) from escorting a lovely lady to her father are thwarted more often than not by his own hand.
The hero (although NOT the title character obviously) is played by the current Governor of the great state of California, Arnold Schwarzenegger. Upon the film’s initial release, this was considered a highly amusing bit of casting as the so-called "actor" could barely speak English and had a completely unpronounceable name. Much of the publicity centered on that bit of silly stuntcasting. To suggest to anyone associated with this film that this man would one day be the biggest box office attraction in the free world would undoubtedly have brought howls of good ol’ boy laughter. Had you been precognitive enough to suggest his political future, you probably would have been locked up!
Other cast members include Ann-Margaret, looking lovely as ever but on the downslide of her early seventies acting career peak, Jack Elam (who, by law I believe, took over Ward Bond’s role of being in nearly every western ever made), Ruth Buzzi in one of her few feature film roles and the great Paul Lynde in his final big-screen role as Indian Chief Nervous Elk.
Directed by stuntman king Hal Needham, THE VILLIAN is by no means a good movie. As a novelty, however, it’s distracting enough. Ah-Nold is surprisingly charismatic even this early in his career. Kirk and his horse seem to be having great fun but they often seem to have little to do with the rest of the film. All in all, THE VILLAIN looks like one of those pictures that was probably more fun to make than to see. If you’re a Warner Brothers cartoon fan, though, it’ll look real familiar.
Posted by Booksteve at 11:05 PM