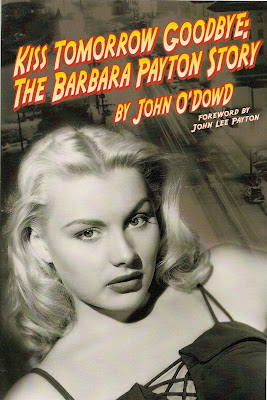 First of all, in the interest of full disclosure, John O’Dowd, the author of the book reviewed today, is also my co-author in the ongoing and upcoming Christa Helm project. His book is KISS TOMORROW GOODBYE-THE BARBARA PAYTON STORY. I’d be willing to bet that unless you’re a particularly knowledgeable film buff you might never have even heard of Barbara Payton. If you have you, like me, might have just considered her as a sad dirty joke punchline in the history of Hollywood scandals. This book has definitely changed my image of Ms. Payton.
To sum up her story, she started at the top, co-starring with Jimmy Cagney and Gregory Peck in late forties films, had a controversial love triangle with actors Franchot Tone and Tom Neal (talk about opposites!) and due to alcohol and what is now believed to be a bipolar condition, she ended up turning tricks in Tinseltown less than fifteen years later. Barbara Payton died in 1967. 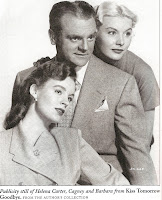 with the classier Tone (Joan Crawford’s ex and also involved in the Black Dahlia case!) over Barbara makes some film noir histories, Barbara’s notorious alleged affairs with Bob Hope and others can be found between the lines in others but who was Barbara Payton and what the hell happened to her? Until this book, that answer was pretty hard to come by.

With KISS TOMOOROW GOODBYE (named after one of her biggest films), John O’Dowd shows a commendably obsessive drive to find out the true story. In his years of efforts, he has talked with everyone from her relatives to her former neighbors to Dr. Joyce Brothers and come up with a portrayal of a beautiful, talented, complex woman who didn’t know how to deal with her mental problems and so fell into promiscuity and alcohol. At times vain, mean and not incredibly likable, we see a full-blown portrait of this hard to understand woman that often succeeds in making one feel the pain she must have felt.
The author juxtaposes her life and career in a fairly straightforward fashion, moving through her early successes in films to lesser roles in no budget westerns and Sonny Tufts comedies. The meat of the story, however, lies in her personal life as we see her go through a succession of men looking for love and constantly showing hope that her career would rise again even as the alcoholism robbed her of her youth and beauty.

the book and became more and more familiar with Payton and her issues, I strangely began to recognize some of them in people that I know now or have known over the years. Suddenly, incidents that touched my own life began to make a little more sense. You can’t help but feel sorry for Barbara as she spirals ever downward in deepening desperation. The jokes about her and her nudge-nudge, wink-wink sexual antics just aren’t funny by the time you realize where they fit in her overall makeup. You just want her to get a little treatment but then that wasn’t readily available or even unde

rstood in her day.
Without sensationalizing the story, O’Dowd has succeeded in fleshing out Barbara Payton in a way I might not have thought possible had I bothered to think about it at all. It gives me hope that we can and will eventually bring the equally ill-fated Christa Helm back to life for readers who never got to know her sass, her drive and her love for life. Thanks for introducing us to the real Barbara Payton for the first time John. She was a remarkable woman! If you call yourself a film buff, then KISS TOMORROW GOODBYE-THE BARBARA PAYTON STORY really needs to be in your library. Get it at BearManor Media.
Posted by Booksteve at 11:26 AM