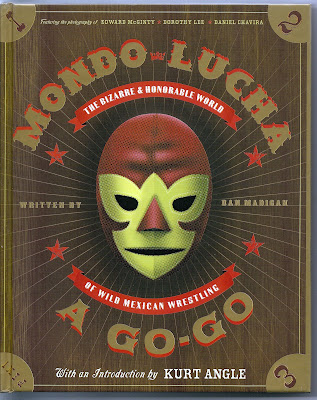 Okay, I finished MONDO LUCHA A GO-GO last night and I have to say I have mixed feelings about it. Visually, it certainly is a treat. Lots of black and white and color pictures that take you from the earliest days of the Mexican wrestling traditions to the present with marvelously psychotronic asides on the tie-in comic books and especially the several hundred Mexican wrestling hero movies! Even if you don’t like wrestling in any form, it’s a fascinating story!
In these pages you meet the legendary El Santo, Blue Demon, Mil Mascaras and a number of lesser known luchadores, all given their own individual biographies as well as having their stories told in the context of the overall sport. In the ring these masked men fought each other in representations of good and evil that thrilled and inspired generations. In the cinema, they fought mad scientists, aliens, monster, vampires, robots and zombies defining an entire subgenre of the Mexican horror film.
The problem that I have 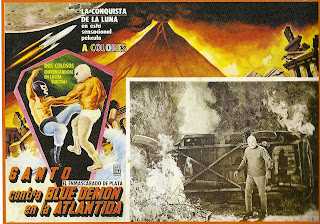 with the book is the writing style. Author Dan Madigan, although listed as a novelist, screenwriter and TV producer who has, himself, worked in professional wrestling, writes in an annoyingly repetitive style, almost as if each chapter were written as a separate article. There are obvious grammatical errors and what, to me, is an odd mix of conversational style and professional style.
The story he tells makes it worthwhile, though. Like Clayton Moore and William Boyd in the US, both of whom based their lives around the values of the cowboy heroes they played on TV and in film, Rodolfo Huerta BECAME El Santo to the point where he was buried in his mask! Same 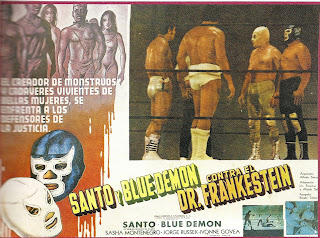 with Blue Demon. In both cases, their sons carried on their good name.
The best written sections of the book are the brown sidebar sections that explain how American wrestling never really "got" the luchadores and, my personal favorite- as election of gospel truths of Lucha movies.
If you like weird and wacky pop culture, it doesn’t really get much weirder and wackier than this and MONDO LUCHA A GO-GO is the most mainstream book on the subject to date so in spite of my caveats, I do recommend it. If you find yourself hypnotized by the cinematic versions of these "real-life" super guys, here’s a link I found for a whole bunch of Mexican Wrestling DVDs.SANTO AND FRIENDS: MEXICINE DVD Can’t personally vouch for ‘em but if I weren’t fighting financial evils right now, I WOULD order from them.
Posted by Booksteve at 8:27 PM