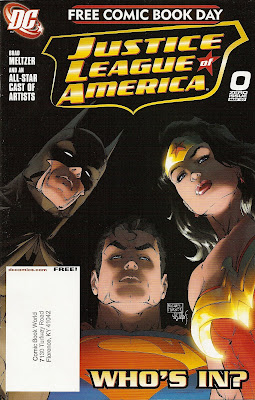 To say I’m having a rough weekend would be putting it mildly. What with me on week four of being sick, other severe illness in the family, having to cut off the water to the house due to a burst pipe, missing SPIDEY 3, work problems that have followed me home, and missing friend Kim’s birthday it would almost be a total loss if not for FREE COMIC BOOK DAY.

We dropped my wife at a Doctor appointment yesterday and 10 year old Bookdave and I decided to hit up the local comic book shoppe for the annual freebies. The problem was that so did everyone else! I have never seen their parking lot so crowded. Even the secret parking spots in the back were filled with more waiting to take their place. Undaunted, we moved on, looking to find a nearby parking lot where we could avoid towing long enough to hike over.

After a couple of attempts and nasty looks from folks who may well have been chasing off others all morning, we ended up on the fringes of a shopping plaza some 3-4 blocks away and on the other side of the wide and busy thoroughfare. Now, BD is still recovering from his knee giving out more than a week back but he wanted to try so we walked back toward our goal…as it began to rain.

About fifteen minutes later (and after one HECKUVA time getting across the road with him dragging one leg) we arrived to find Sonic the Hedgehog big as life posing for pictures! Inside, we perused the Free Comic Book Day offerings and chose a combined total of eight. While resting up from our walk, we also found the DC SHOWCASE featuring the LEGION OF SUPER-HEROES, Dave’s favorites from a very early age. In the dollar box, I was pleased to find a brittle but complete copy of DC’s 1952 FLIPPITY AND FLOP # 1! Hey, you get excited about what you want to get excited about. I got excited about this, okay? 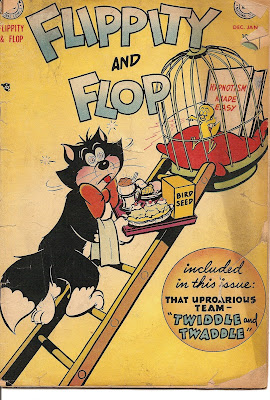 Anyway, the FCBD offerings we ended up with were LITTLE ARCHIE (thanks for the tip, Fred!), BONGO COMICS, BUZZBOY AND ROBOY RED (never heard of it but enjoyed it immensely!), MICKEY MOUSE MEETS ROBIN HOOD, NEXUS’ GREATEST HITS, LEGION OF SUPER-HEROES, the great UNSEEN PEANUTS, HOW TO DRAW and JUSTICE LEAGUE OF AMERICA # 0.

All of the above were good but I must say that I was surprised, pleased and amazed to find the JLA issue to have more substance than I expected. Essentially the story of three super-friends who and their various encounters over the years, told in a mix of art and writing styles echoing the past and previewing the future, it is a powerful look at true friendship and how it really can transcend all other issues. Art comes from a dozen different illustrators and fits perfectly everywhere. The story itself is the latest from best-selling novelist Brad Meltzer. It’s almost enough to make me want to follow the new series.

Anyway, the comics were the highlight of my day so thanks to the publishers and the creators. When all seems darkest, comics can always shed a little light on the subject!
Posted by Booksteve at 11:39 AM