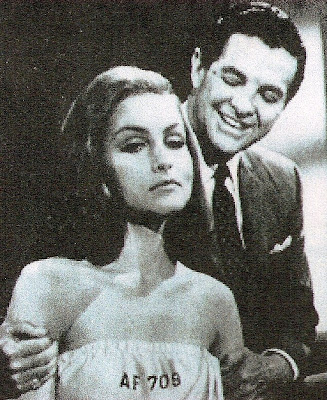 Recently I was privileged to see several episodes of a rare TV sitcom entitled MY LIVING DOLL for the first time since I was six years old. Not that it’s all that good, mind you. It’s horribly sexist and ridiculously unrealistic even within its own fantasy structure. It was, however, a favorite of mine as a child and was long thought to be non-existent as supposedly all prints were contractually destroyed when it finished its prime-time run. In 1981, I missed a question about the show on SCREEN TEST, the game show I appeared on, and it cost me the remainder of my first season. Okay, I know that I should just let these things go but I didn’t, alright??!! Anyway…
MY LIVING DOLL was part of the fantasy sitcom craze of the sixties that brought us BEWITCHED, THE MUNSTERS and even MY MOTHER, THE CAR. Here the premise was that government psychiatrist Bob Cummings has custody of a lifelike female robot played by a pre-Catwoman Julie Newmar. The fantasy aspect enters into it when Cummings, a notorious womanizer in previous sitcom roles, simply wants to make her act like a proper young woman. Yeah, right.
Cummings was an old hand by this point but his performance is a bit too mannered. The revelation is Newmar who is quite adept with a quip or a computer reference usually delivered totally deadpan. She’s hilarious!
For me, though, the most fun was in seeing that all of the episodes seemed to be directed by Ezra Stone, radio’s Henry Aldrich. My wife and I performed with Ezra in Cincinnati in what turned out to be one of his final public appearances. After radio, he had gone on to direct such shows as THE MUNSTERS, LOST IN SPACE and DIANA (the Diana Rigg sitcom). Even better is that one episode featured Parley Baer as a judge. We actually worked with Parley a number of times, most notably in a re-creation of a SUSPENSE episode in which he attempted to murder his wife (played by MY wife) and I, as their teenage son, helped save her!
So here I was, age 48, watching a sitcom I hadn’t seen in 42 years and finding two very personal connections I could never have imagined when I first saw the episodes in 1965. Sometimes I feel like I’m living in an episode of THE TWILIGHT ZONE…but that’s another story.
Oh, one more bit of speculative trivia for STAR TREK VOYAGER fans--Although later called Rhoda, Newmar's robot, as you can see in this picture, is designated as project AF 709. Throughout the first episode, she is referred to as "709" as in "7 o' 9" as in "7 of 9. " Hmmm... an obscure nod from one statuesque female computer to another? You decide.
Posted by Booksteve at 9:37 PM