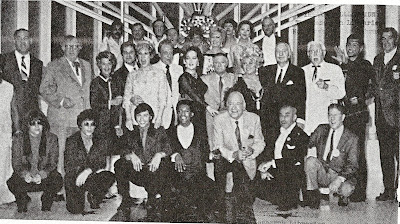 Courtesy of ace researcher DEREK Tague (aka the king of the dyslexic joke and the mayor of Etherville), here's a nice cast photo and a couple of contemporary reviews (or in one case half of one) of the barely released 1970 film, THE PHYNX, a true contender for the coveted title of worst film ever made. Just a quick recap, many of the world's pop culture icons ( the Bowery Boys, the Lone Ranger and Tonto, Colonel Sanders, Dorothy Lamour, etc.) are kidnapped by an enemy nation. The US forms a Monkees-style rock group (naturally) and has them trained as secret agents (by Richard Pryor and

Dick Clark amongst others) to be sent to rescue the plethora of out of work guest stars. Hilarity ensues...or presumably might have if the otherwise talented folks behind this misfire hadn't made nearly every possible mistake along the way.