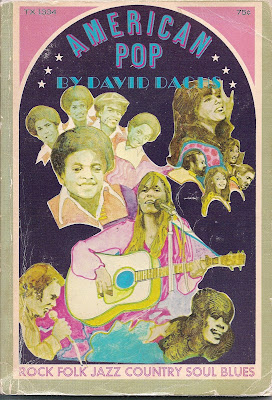 The other day we wrote about David Dachs and his 1968 book, INSIDE POP. Well, a year later he was back with a somewhat more ambitious look at the American music scene in AMERICAN POP, another Scholastic publication. This time, the author attempts to give his presumably school-age readers a full overview of the different types of music that were popular by highlighting certain performers in each style. Thus we have individual chapters on Folk, Tin Pan Alley, Pop, Jazz, Country and Western, "Mod Country," Broadway and Hollywood, Rock and Gospel Soul.

Quite frankly, I think he bit off more than he could chew this time knowing he had less than 200 pages with which to work. Still, I can imagine the seventh grader in those pre-Net days who got ahold of this book and at least began to discover the wonder and the history behind what he /she was hearing on the radio.
Posted by Booksteve at 9:37 AM