A Couple of Great TV Specials 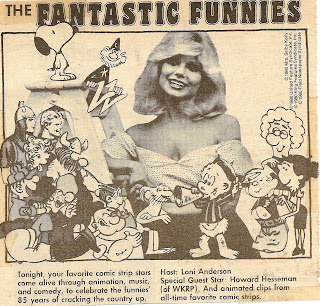 Here's a couple of great TV specials from the early 1980's.

The first, THE FANTASTIC FUNNIES, featured WKRP IN CINCINNATI's busty Loni Anderson as a Daisy Mae type in a survey of classic comic strips. The special featured new animation (in some cases the ONLY animation some of these characters would ever receive) and some rather lame comedy bits. Clearly designed for the casual comic strip fan and as nostalgia for older folks rather than for us buffs, it was nevertheless an entertaining bit of fluff. In spite of my at times spooky memory, though, I'm at a loss to remember exactly what part POGO played in the show. Was there POGO animation here?

The other show, WHEN THE WEST WAS FUN, had Glenn Ford 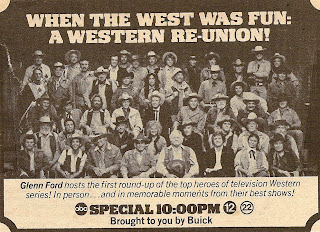 introducing an old-time western saloon full of TV cowboys and Indians from the fifties, sixties and seventies. This one I have on tape somewhere and while there really is zero substance to the whole thing, it's so much fun for boomers to see all their old heroes in costume again. LAWMAN'S John Russell and Peter Brown, SUGARFOOT's Will Hutchins, THE RIFLEMAN's Chuck Conners and Johnny Crawford, Clayton Moore's LONE RANGER and a couple dozen others appear. Stars of THE VIRGINIAN, WYATT EARP, THE HIGH CHAPPAREL, LAREDO and even the short-lived DIRTY SALLY (radio and TV star Jenette Nolan). There are some clips, too, but the fun is in seeing the old stars reenact their old roles...if only for a few moments.
Posted by Booksteve at 9:54 AM