Justice For All Includes Children-Superman 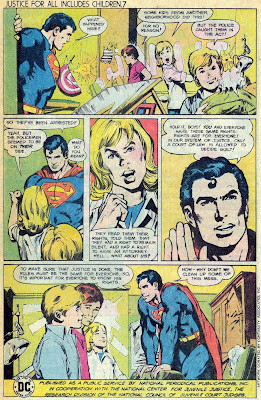 Here's a SUPERMAN PSA from the late seventies, apparently number seven in a series (collect the whole set!) featuring everyone's favorite Man of Steel with artwork credited to Continuity Associates which, of course, is Neal Adams and crew. Neal's influence is clear here but then it would be. Not sure if he actually had anything to do with this one at all. Jerry Bingham? Our friend Mike Netzer? Some anonymous assistants? Either way, a nice one.
Posted by Booksteve at 6:59 AM