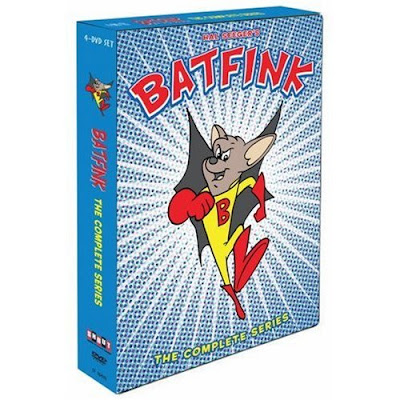 BATFINK is coming! To DVD that is! In July, the complete 1967 series is being released on DVD. For many years, BATFINK was my cartoon Holy Grail. As a child, I saw it regularly listed in TV GUIDE but on a channel we couldn't get! The title and the fact that it was identified as a cartoon made it obvious that it was a BATMAN parody and I was all things BATMAN at that time. I longed to see this show! I drew ( long lost) pictures of what I thought the character would look like and patiently scoured each week's listings to see when my local channels would pick it up. This never happened. I may even have written to them but I'm not sure. Every once in awhile, when atmospheric conditions were just right, I could aaaaallmost pick up that out of town station and once--just once--I saw BATFINK!! If, that is, you can say it was seeing BATFINK when all I could make out were ultra-grainy images and all I could hear was the ocassional fading in and out appearance of the title character's heroic voice.

That voice, I would find out much later, was provided by a multi-talented man named Frank Buxton. Buxton is the co-author of the seminal Old-Time Radio book, THE BIG BROADCAST. As an award-winning writer/producer/actor/director, he has worked with Woody Allen, Bill Cosby, Jonathan Winters and even fellow blogger Mark Evanier on an episode of his GARFIELD AND FRIENDS. For more on Frank Buxton, here's a link to a Mark Evanier piece:news from me - ARCHIVES

With the coming of cable, BATFINK finally surfaced on a channel I could get only about twenty or so years after I had obsessed over it. It was worth the wait. Like many limited animation cartoons of the sixties, Hal Seeger's BATFINK made up for its shortcomings with some genuinely amusing super-hero parodies and funny voice acting. I watched it regularly and was able to introduce my son to it. Check out this episode I found online this morning PistolWimp - Batfink: Hugo The Crimefighter. Then check out this cool BATFINK site: Batfink. Me, I'm gonna see if I can get somebody to send me a review copy of that upcoming DVD set!
Posted by Booksteve at 1:06 PM