How To Be A Civilian 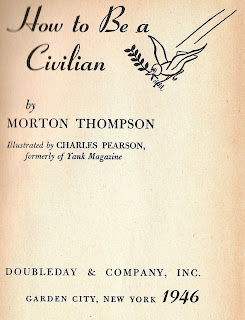 HOW TO BE A CIVILIAN by Morton (no relation that I know of) Thompson was a 1946 book written with the idea of helping the thousands of returning servicemen fit back into non-military life. It is at the same time a humor book and a serious how-to book. The author, himself a recently returned vet, writes in a combination of uncensored military slang and the instructional voice of a teacher.
Chapters in the book include:
Why Are We Peaceing?
What Are Girls?
Bucking and Bitching
How to Get in Bed With Your Wife
How to Talk Civilian

The book looks at being a civilian as (sadly) simply a break between wars. Thus, the main thrust of the book is how to fit in while you need to and before you are recalled for the next war.
As I said, it is uncensored…to an extent. Lots of "damns" and "hells" and "bitches," sexual slang and references to prostitutes as a recreational activity. For 1946, this would have been considered pretty extreme for a civilian book! On the other hand, the word "tuck" appears occasionally where a similarly spelled word would seem more appropriate (if still inappropriate). Also the term "chicken shed" (sic) appears in context that might be interpreted with a similar sounding word instead. Were "tuck" and "shed" really used as curse words in postwar America? WTF? That’s a load of chicken sh**!!
Posted by Booksteve at 11:27 AM