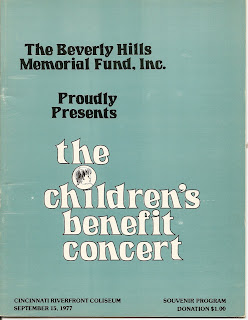 Another, much sadder, anniversary this past week was that of the Beverly Hills Supper Club fire. The third largest nightclub fire in US history, 165 people were killed that night including the parents of the young woman who sat directly in front of me in my Senior Geometry class...a week away from our graduation. Everyone in this area knew someone who was connected with this terrible tragedy. Four months later, in a much more uplifting moment, Cincinnati's Riverfront Coliseum hosted THE CHILDREN'S BENEFIT CONCERT to raise money for the families of the victims.

My parents and I attended. John Davidson had been the headline act on the night of the fire and repeated that role at the Concert. A favorite of mine since Disney's HAPPIEST MILLIONAIRE, he was charming and entertaining. This was more than could be said of Dirk Benedict (later of THE A TEAM) who came out on stage and faced away from my side of the audience for the entire time. Not known as a singer, he nevertheless sang one song.

Local celebs Nick Clooney and Bob Braun put aside their (exaggerated anyway) rivalry and co-hosted the event. Others who appeared included comics Teter and McDonald who had been onstage at the moment the fire was announced and other supper club regulars Tony Darrow, Donna Cellini, John Gary, Patti Pivarnik, Marilyn Maye and the Van Dells. Frankly, I don't remember any of them at all except for the Van Dells, a good Sha Na Na type group who apparently were feuding amongst themselves and were soon to lose one member. One act I do recall was Ron Townson and Wild Honey. Ron was the big guy from the hitmaking Fifth Dimension, here briefly attempting a side career with a group of four "Dawn"style female backup singers. According to the souvenir book, "He tittilates the ear with a sound that really sends you." Oookay then.

Here's a link to more info on the fire, itself:Beverly Hills Supper Club fire - Wikipedia, the free encyclopedia
Posted by Booksteve at 8:19 AM