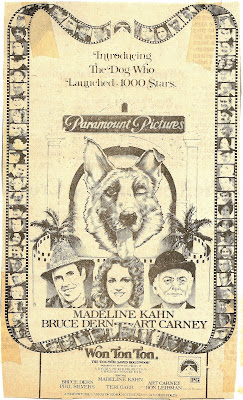 The other day we revisted THE PHYNX, one of the worst films ever made but notable for its large and esoteric collection of old-time stars. Many of that same crowd came together once more just a few years later in 1976's WON TON TON, THE DOG WHO SAVED HOLLYWOOD. Intended as much more of a major release than its predecessor, WON TON TON failed almost as badly.

The story is a clever one about a young woman trying to become a star in the early days who is upstaged by a Rin Tin Tin-like German Shepherd. Madeline Kahn stars, fresh off her triumphant appearances in Mel Brooks films. Longtime movie villain Bruce Dern was in his brief goodguy phase (that included Hitchcock's final film) and TV comedy legend Art Carney had been a surprise Best Actor Oscar winner the previous year. Unfortunately, they all ended up in a rambling plot under the ham-handed direction of future UK restaurant critic and TV personality Michael Winner, best known for violent action films like DEATH WISH!