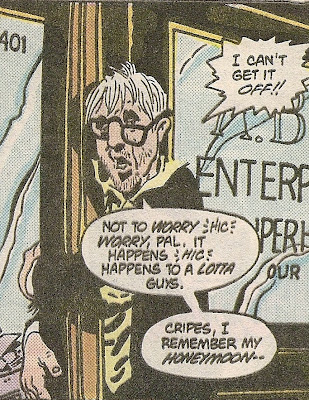 Okay, cut me some slack. I've just started on heavy meds. Still, I found it hilarious that the Comics Code, way back in 1985, would let this rather obvious (and lame) erectile dysfunction joke get through in one of Keith Giffen and Robert Loren Fleming's AMBUSH BUG stories in ACTION COMICS! I doublechecked the front of the comic, though and it is most definitely Code-approved. Sigh.
Posted by Booksteve at 10:39 AM