Movies That Fell Through the Cracks # 59 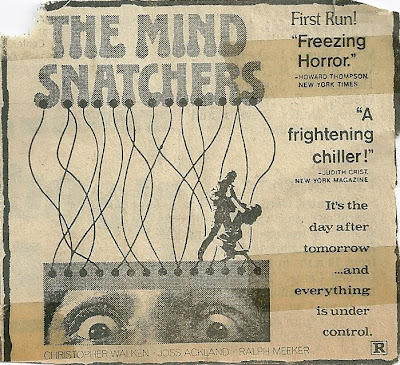 I first noticed the quirky wonder of actor Christopher Walken in 1978's THE DEER HUNTER and by 1982's one-off TV comedy/drama entitled WHO AM I THIS TIME with Susan Sarandon, still one of my all-time favorite shows, he had completely won me over. Ever since, in projects ranging from THE PROPHECY to THE COUNTRY BEARS to the masterful WEAPON OF CHOICE music video, he's been enjoyable performer to watch.
Did you know he started out as a child star, though? IMDB says so! Or that his name was appearing above the title long before DEER HUNTER, including in this bizarre 1973 low budget sci-fi thriller, THE MIND SNATCHERS (aka THE DEMON WITHIN aka THE HAPPINESS CAGE) The plot is vaguely the story of a military experiment at controlling soldiers' emotions via CLOCKWORK ORANGE-style tactics.
Walken is top-billed with another quirky actor, the British Joss Ackland, as the mad scientist and third string old school leading man Ralph Meeker as the General. Ronny Cox who did DELIVERANCE around that same time also appears.
Behind the scenes, it's more interesting as one of the producers is listed as the legendary Broadway producer Joseph Papp, founder of the New York Shakespeare Festival! Equally legendary record producer Phil Ramone is one of the folks listed as being responsible for the film's score!
Based on a play by playwright Dennis Reardon who had worked with Papp before, THE MIND SNATCHERS turned out to be one of the final projects for veteran TV director Bernard Girard.
Posted by Booksteve at 10:24 PM