Charlie Chan and the Curse of the Dragon Queen-1981 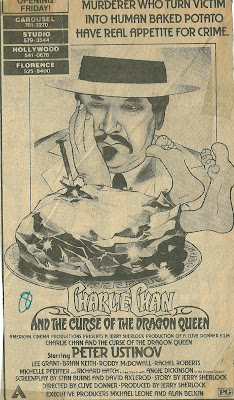 Charlie Chan is, today, quite the controversial character. A few years back when TCM scheduled a Chan film festival, there were protests from supposedly outraged Oriental groups and the festival was tabled until it could be revamped to include a round table discussion of the issues to run prior to each film. The fact is that while the Charlie Chan books and movies and comics and cartoons do include racial stereotypes of the day, they also include Charlie himself who plays on those cliches and uses them to his advantage. In any medium, one thing is certain: If Charlie Chan is in the room, then Charlie Chan is the smartest person in that room.

That said, I have never been able to come up with a satisfactory explanation for CHARLIE CHAN AND THE CURSE OF THE DRAGON QUEEN. Oh, it's easy to see WHY it was made. Just look at these ads as they blatantly rip off the traditional seventies PINK PANTHER film ad campaigns. This was an attempt to combine the PINK PANTHER franchise with the MURDER BY DEATH style silly black comedy-mysteries of Neil Simon.

Star Peter Ustinov is one of the most interesting performers of the twentieth century--erudite, urbane, witty, a great actor/director and humanitarian and one of the all-time great talk show guests. He often chose some odd cinematic vehicles, however. He had made a bit of a film comeback in 1976's LOGAN'S RUN which led to him inheriting the role of Agatha Christie's Hercule Poirot when Albert Finney passed on the follow-up to MURDER ON THE ORIENT EXPRESS. As Ustinov fit the role of the persnickety Belgian detective physically much better than Finney, he made it his own and would ultimately play the character in a total of six films produced over a ten year period. With his facility for accents, his gentle humor and the unspoken tradition that the Hawaiian police detective was never played by a Chinese actor, it must have seemed like a brilliant idea to someone to cast Ustinov to star in this picture.

As for the script, it's credited to award winning writers David Axelrod and Stan Burns (THE MARY TYLER MOORE HOUR, THE DICK CAVETT SHOW, THE DEAN MARTIN ROASTS) from a story by the film's very controversial (Look him up. I'm not getting into it here.) producer, Jerry Sherlock and, of course, featuring characters created by the long gone Earl Derr Biggers. 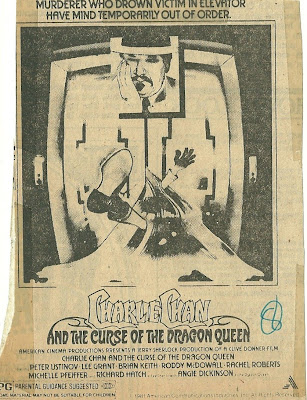 The TV movie-style cast that rounds out the picture includes reliable presences such as the always fun Roddy McDowall (as a cynical,wheelchair-bound butler), Angie Dickinson (as the overdressed and badly acted Dragon Queen), Lee Grant, Brian Keith and Rachel Roberts. The latter two actors both committed suicide--one presumes NOT because of this picture. A young and cute (but vacuous) Michelle Pfeiffer also appears as does the always interesting African actor Johnny Sekka.

Richard Hatch (not the SURVIVOR guy) from the then-recent original BATTLESTAR: GALACTICA appears in what amounts to the lead role as Lee Chan. Hatch, of course, was also NOT of Oriental descent. I don't believe he's Jewish either but here he plays a Jewish-Chinese character who is the most oblivious bumbler this side of Inspector Clouseau (naturally).

The picture has been going for nearly half an hour by the time Charlie enters the plot (outside of an opening black and white flashback) and it becomes immediately obvious that he speaks almost exclusively in fortune cookie sayings.

Brian Keith,as the SF police Inspector, can't say two sentences without cursing and seems to be basing his performance on that of Jackie Gleason in the SMOKEY AND THE BANDIT pictures.

The plot itself is typical of the old films but with the accent on the silly comedy that was used as comic relief in the originals. A retired Chan teams with his bumbling grandson to solve a bizarre series of San Francisco murders that seem to be straight out of a Dr Phibes movie. Chan's old nemesis, the Dragon Queen, is suspected! The best part of the film is the San Francisco location shooting. It's like watching GOOGLE MAPS only with actors. The worst part would have to be the obligatory for the time disco scene! Or maybe the Old West-style horse and buggy chase? It's a toss-up.

Is it racist? Yeah...can't deny it. More than even the originals, CHARLIE CHAN AND THE CURSE OF THE DRAGON QUEEN plays on Oriental tropes and cliches and has Caucasian actors doing so with barely even any attempt at makeup. Peter Sellers' ill-advised final film, THE FIENDISH PLOT OF FU MANCHU, mined much the same ground with an equal absence of laughs around the same time. Oh, both have their moments but they are few and far between.

Peter Ustinov went on to become knighted in spite of CHARLIE CHAN AND THE CURSE OF THE DRAGON QUEEN. Michelle Pfeiffer continues a long and successful career in films of varying quality. Other than that...

Don't believe me? Did I mention the whole thing is on YouTube? See for yourself. Here's Part one. If you insist, you can follow it to the other nine parts!

Posted by Booksteve at 3:35 PM