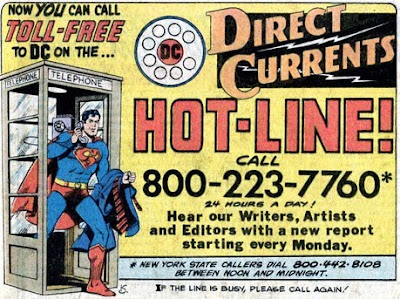 In the mid-sixties, National Comics began utilizing a lightning logo'd yellow box labeled DIRECT CURRENTS to plug upcoming comics. "DC," get it? The title and logo were revived in the seventies for a column in issues of THE AMAZING WORLD OF DC COMICS. Later on it was done up as a mail-order newsletter. In between those last two incarnations, however, was THE DIRECT CURRENTS HOTLINE!

You called the number, originally once a week but later less often, and you were regaled by one of your favorite creators with hard to hear news and information about upcoming comics and related topics via the miracle of...taped messages. A few years later this might have been a pay call but the Hotline was free!

I called regularly at first and, like the packrat I am, collected all the information on a telephone pad! What follows here, then, though undoubtedly incomplete and subject to both my bad penmanship and the often indecipherabile recordings of the writers and editors involved, is a checklist of what was actually reported on the legendary DC HOTLINE. Remember--in those prehistoric times, what might seem like simple news here wasa ctually early scoops before they even hit the fanzines!

Mon, Nov 29--Marty Pasko spoke, hawking DC SUPERSTARS and presenting the news that SUPERBOY would be appearing in ADVENTURE and that AQUAMAN's title was returning.

Mon, Dec 6--Denny O'Neil reported that SUPERMAN FAMILY and HOUSE OF MYSTERY were now $1.00 titles and then plugging his KUNG-FU FIGHTER.

Mon, Dec 20-Publisher Jennette Kahn plugged the new line of $1.00 comics as having Neal Adams covers and then wished all of us fans a Merry Christmas.

Mon, Dec 27--Jack C. Harris (now one of my Facebook friends) mentioned that Inspector Henderson was a regular in BLACK LIGHTNING and plugged upcoming team-ups of Batman and Deadman as well as Kamandi and Omac.

Mon, Jan 4--Sol Harrison asks for the fans help in getting the comics to the newsstands, plugs tthe SUPERMAN movie contest and wishes us all a Happy New Year.

Thursday, Jan 20--Marty Pasko was back plugging SUPERMAN projects and giving us a heads-up on the one-shot 5 STAR DC SUPER SPECTACULAR. He then offered get well wishes for us to quickly recover from the flu (??).

Tue, Jan 25--Future DC publisher Paul Levitz with lots of Legion news including a funeral, a wedding, an epic and a JLA team-up!

Sun, Feb 6--Gerry Conway was new to DC then and appeared to promote his projects including the revival of CHALLENGERS OF THE UNKNOWN with Swamp Thing, Deadman and Rip Hunter. He also spoke of "Atom's Quest (??)", the revived MISTER MIRACLE and NEW GODS titles and the oversized SUPERMAN VS WONDER WOMAN set in WWII.

Wed, Feb 16--Jack C. Harris back to summarize SHADE THE CHANGING MAN, a title that would never really get the respect it was due until many years later.

Thur, Mar 3--FBook pal Mike Gold with major news on the announced SUPERMAN movie! The lead had been cast and it would be an unknown actor named "Richard Leeds!" Hey, that's what I wrote down. Maybe he said Christopher Reeve and it crackled a bit too much or maybe he was so unknown that Mike actually got it wrong. Who knows? Anyway, the director was announced as OMEN director Richard Donner with a script by "a 007 screenwriter(??)". The good news for fans was that it was to be played straight, filmed worldwide and have a huge special effects budget!

Tue, May 3--Paul Kupperberg (who was at many local cons back in those days and, you guessed it, is now a Facebook friend) makes an appearance to promote AQUALAD in ADVENTURE, THE NEW DOOM PATROL and POWER GIRL in the revived SHOWCASE title.

Tue, May 24--After all these execs, writers and editors, we finally get an artist! The late Marshall Rogers talked of two upcoming projects with Steve Englehart--the new MISTER MIRACLE and the DETECTIVE COMICS series that went on to define Batman for that era. Who knew?

Tue, June 21--Al Milgrom explains his new editorial duties at DC on titles including KARATE KID, WEIRD WESTERN, Kamnadi and LSH. He also introduces THE HUNTRESS and xplains that she will be appearing in the newly super-sized BATMAN FAMILY title.

Sun, July 24--Jennette Kahn returns for one final message, thanking us for calling and explaining that the Hotline was soon to be replaced by the DIRECT CURRENTS newsletter. Along the way, she hinted of new dollar comics and new heroes like Firestorm.

Then it was over. Again, I'm not sure if I just skipped weeks or if they just quit updating it on a weekly or regular basis but it was fun while it lasted. Interesting to note the different accents of the creators, many of whom were recognizably from the East Coast. Most did as good a job as possible, undoubtedly reading from a prepared script into a less than stellar microphone that sometimes had real issues on playback. Thanks guys!
Posted by Booksteve at 8:43 PM