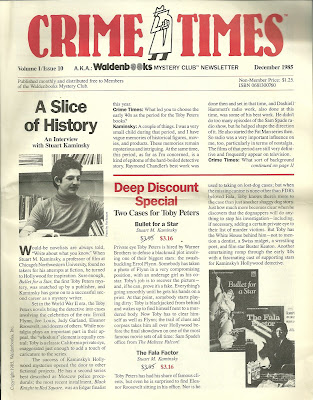 Just found out one of my favorite authors passed away about two months ago--Stuart Kaminsky. A film scholar, one of the first books I ever read by him was a biography of Clint Eastwood. In the early 1980's, however, I discovered his Toby Peters series of mystery novels (which had only three books out at the time). Toby was an L. A. private dick in the Hollywood of the late 1930's (and later 1940's) whose name got around the movie colony as someone trustworthy. Thus his clients included celebs of the era such as the Marx Brothers, Bela Lugosi, Fred Astaire, Errol Flynn and even Salvador Dali and Eleanor Roosevelt! His backstory ran from book to book and inc

luded his estranged tough cop brother, his ex-wife, his deaf landlady and sidekicks like a professional wrestler turned philosophical poet and an intellectual former Munchkin. The Toby Peters books were fun, quick reads and after awhile probably served as a breather for Kaminsky who was by then being nominated for awards left and right for his various other, more serious police procedurals.
Seen here is a 1985 interview with Stuart Kaminsky from Waldenbooks' CRIME TIMES, the newsletter of the chain's then-popular Mystery Club.

Here's a link to his obit:
http://www.telegraph.co.uk/news/obituaries/6711842/Stuart-Kaminsky.html 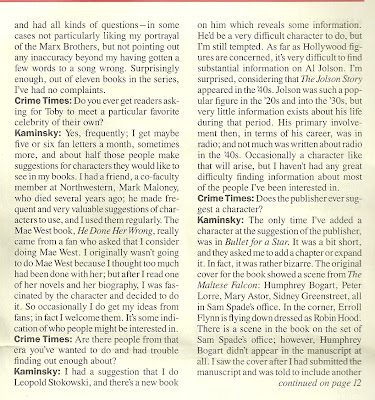 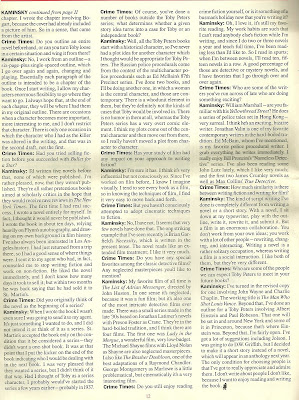 Posted by Booksteve at 4:49 PM