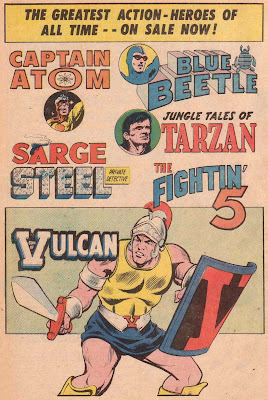 Tony Tallarico aside, Charlton hero comics of 1965 were pretty cool! Ditko on the revived CAPTAIN ATOM, BLUE BEETLE in his fotyteenth incarnation since the late 1930's, early Roy Thomas on the THOR-like SON OF VULCAN, Kubert-style art from Sam Glanzman on JUNGLE TALES OF TARZAN (mistakenly believed to be in public domain so Charlton put out 4 issues in spite of Gold Key's licenses TARZAN comic), Dick Giordano's SARGE STEEL and the Stan Lee-style scripting of THE FIGHTIN' 5! " The greatest action heroes of all time," though? Don't think I'd give 'em that...except maybe Tarzan!
Posted by Booksteve at 11:06 PM