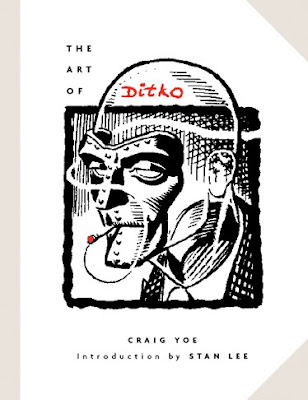 Before writing a review of Craig Yoe's upcoming volume, THE ART OF DITKO, I should--in the interest of full disclosure--remind one and all that I am a member of I.T.C.H., Yoe's International Team of Cartoon Historians and, in fact, in future volumes from IDW's YoeBooks imprint, I'm actually listed as a "Media Associate" to Yoe Studios. I did NOT, however, have anything to do with THE ART OF DITKO.

That said, it's good. A nicely designed hardcover book with an amazing and unique self-portrait of the rarely seen artist on its cover, THE ART OF DITKO intersperses high quality full color scans from Charlton Comics of the 1950's, '60's and '70's with single page covers and original artwork, Being from Charlton comics, these scans are naturally better quality printing (on MUCH better paper!) than any of the originals ever were!

Content-wise, it's Ditko. If you are a fan, here's some good and little seen art spanning more than two decades. While the stories themselves often fall short, there's no denying the power of most of the ar 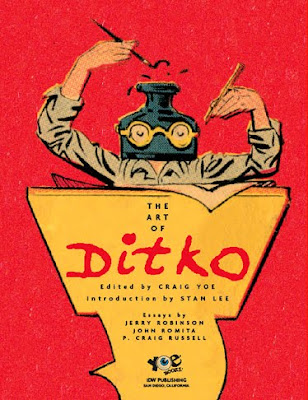 t here. Although not printed sequentially, it's interesting to note the artist's rapid development as he led up to his arguable peak on SPIDER-MAN in the early '60's. You see his stock bits like floating eyes, dripping water and the DR STRANGE-style other dimensions but in the early strips you can also see the strong influence of fellow artists such as Joe Kubert, Mort Meskin and Alex Toth.

The introduction by Stan Lee, although entirely appropriate and quite flattering, may prove to be somewhat controversial in that its wording will no doubt enrage the artist's more militant acolytes in spots. Along with the continued careful wording over "Who created Spider-Man?," the legendary writer/editor/publisher makes reference to the fact that Ditko was "practically plotting the stories by himself" after awhile.

Others contributing brief essays are John Romita, P. Craig Russell and Jerry Robinson, all of whom give a little more insight into the artist and his work. Perhaps the best insights, though, come from Yoe himself whose anecdotal reminiscences of actually meeting and hiring the man come off as both amusing and telling.

With Ditko and his famously hardcore Objectivist values becoming more prominent on the Internet in recent years in a series of essays and more and more books and websites celebrating more than five decades of work from this singular comics creator, it is a grand time for fans old and new. If you're NOT yet a fan, this book may not be the one that will convert you but if you ARE a fan, it will be a necessary and most enjoyable addition to your library.

To see some pages and/or order the soon to be released book, go here:
http://theartofditko.com/
Posted by Booksteve at 8:55 AM