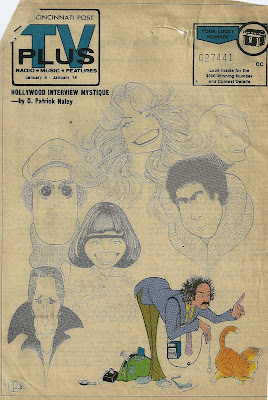 Longtime readers may recall that we here in the Cincinnati area had the privilege of having several years of art from illustrator Daerick Gross (THE VAMPIRE LESTAT, GETTING IT ON) back in the late 1970's when he was a staff artist/editorial cartoonist for THE CINCINNATI POST. Here's yet another of his local TV mag covers, this one from January of 1977 with nice caricatures of Fonzie, Starsky and Hutch and the Captain and Tennille as well as the late Farrah Fawcett (-Majors at the time).

Addendum--this cover had to be carefully scanned as the cat had already scratched it nearly in half. After the scanning, however, it got caught on the edge of the scanner and ripped off the rest of the way. Sigh. Art can be so ephemeral.
Posted by Booksteve at 12:32 PM