Christmas With the Super Heroes-1982 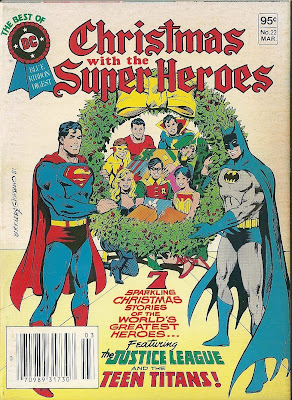 One of my favorite Christmas comics has got to be THE BEST OF DC # 22 from the holiday season of 1981. It's a digest-sized CHRISTMAS WITH THE SUPER-HEROES special issue edited by the legendary Julie Schwartz. The front cover is by Rich Buckler and Dick Giordano while the more stylized back cover is drawn by George Perez.

This Wintertime treat came out when I was 22 and features seven offerings--6 from DC (including one previously unpublished!) and 1 from Fawcett. It starts out with what has to be my all-time favorite DC Christmas story, the TEEN TITANS in 1967's "The TT's Swingin' Christmas Carol" by that wacky Bob Haney and featuring some of Nick Cardy's best comics art ever in my opinion. Wonder Girl, in particular, never looked cuter than she does here!

A simple "Merry Christmas" is the title of a 1970's BATMAN offering by the solid team of Denny O'Neil, Irv Novick and Dick Giordano who did a lot more Dark Knight stories during that period than fans seem to remember.

"Freddy Freeman's Christmas" naturally features DC's inherited character CAPTAIN MARVEL, JR in a short and sweet Santa story with art that looks to me more like Mac Raboy swipes than Raboy himself but the reproduction is so tiny I can't say for sure. 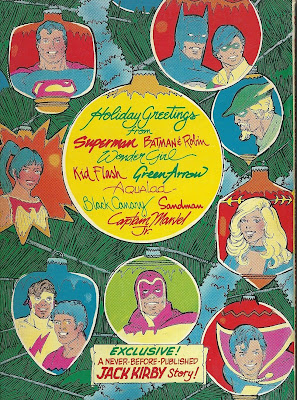 dited to the great Jerry Robinson, the Bob Kane assistant/ghost who is generally credited with creating or co-creating Robin and the Joker and who went on to become a teacher, a comics historian and currently one of the "grand old men" of the field.

Another gem of the issue is the Mike Fleischer/Jack Kirby/Mike Royer SANDMAN story that had remained unpublished from the title's then recent short run until this issue. Love that bizarre series or hate it, this is still a fun story with a fine-looking Kirby Claus.

"Robin's Very White Christmas" was a back-up story of the Teen Wonder from about a decade earlier by the always under-rated Bob Rozakis with some good art by old pros Jose Delbo and Vince (Go to your respective corners) Colletta. It even features a cameo by Dick Grayson's rarely mentioned in the comics Aunt Harriet!

The last story is a mid-seventies JLA story from one of that title's best periods, albeit one soaked in Marvel-style continuity and subplots. "The Man Who Murdered Santa Claus is a present from Len Wein, JLA workhorse Dick Dillin and inker Dick Giordano (him again) and features a very early appearance by the John Stewart Green Lantern as well as a cameo by the Phantom Stranger and a big change for the Red Tornado!