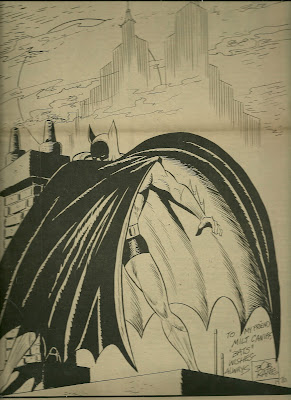 Probably anyway. Here, from a TBG interview with Kane that was, based on what we know now, at least partly fictional, is a reproduction of a lovely BATMAN image done for influential cartoonist Milton Caniff. According to the piece, Caniff, whose TERRY & THE PIRATES and STEVE CANYON are the stuff of legend, proudly displayed this Bob Kane original in his studio. Assuming that the man himself did it, it is definite proof that he could still draw his classic character even if he chose not to all those years when it was being ghosted under his signature.
Posted by Booksteve at 12:37 PM