The Man in the Santa Claus Suit 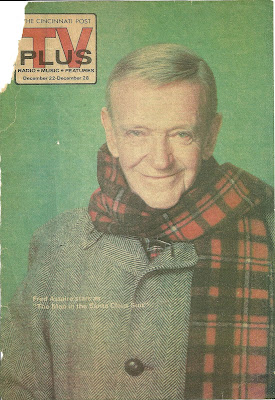 As Christmas films go, I would hardly rank THE MAN IN THE SANTA CLAUS SUIT with such classics as WHITE CHRISTMAS or even SANTA CLAUS CONQUERS THE MARTIANS (or for that matter with such second-stringers as FITZWILLY or THE BISHOP'S WIFE either). No, this film is the proverbial odd duck. For all intents and purposes, in fact, it's an episodic variation on TV's contemporary FANTASY ISLAND. In this case, however--and this is what makes it the least bit memorable--the enigmatic "Mr. Roarke" character is played by the legendary dancer/actor Fred Astaire.

The great film star spoke in interviews that this would be, at age 80, his final time before the cameras. (It wasn't. That would be GHOST STORY two years later) He appears in a series of roles here--actually all the same person--, all of whom interact/interfere with three characters in unconnected semi-dramatic holiday-related stories. Gary Burghoff, John Byner and Bert Convy, three actors very much of their time, are actually the POV characters whose lives are eventually changed for the better by this mysterious (as if the title didn't give it away) stranger.

When television prevailed in the 1950's, Astaire was one of the first of the Old Guard to embrace the medium, starring in several critically acclaimed dance and variety specials. His effortless grace and easygoing acting style made him an always welcome character actor, too and before this he had, in fact, recently appeared on an episode of BATTLESTAR: GALACTICA. At the time, he said it was to impress his grandkids who had no idea of his importance in the history of motion pictures!

THE MAN IN THE SANTA CLAUS SUIT usually turns up on some of the off-channels at this time of year. Is it good? Not very. If you're a film buff, though, catch it for the whimsical performance of the one and only Astaire!
u
Posted by Booksteve at 10:59 PM