Superman Vs. Muhammad Ali and My Facebook Friends Are There! 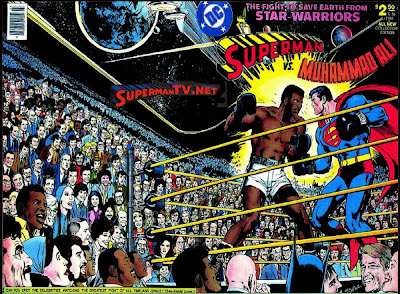 I don't wish to sound like I'm bragging here--just noting the differences that modern technology has made possible since the heady days of 1978. At the time this treasury-sized comic (with some of Neal Adams' best comic book work in my opinion) came out, it was fun to go through the caricatures on the cover and see which ones I could recognize. Most of the big celebs, movie and TV stars of course, Bill Gaines, the Carters, Wolfman Jack, Raquel Welch, Cher, Kurt Vonnegut, the DC characters like Batman, the reunited Beatles (who go strangely un-noted on the interior key). Along with all of these famous folk, however, there were a lot of comic book pros "in attendance."
Last week I took a look at the list for the first time in a long time and found a surprising number of people that I have come to actually know one way or the other in recent years, largely though the Internet. So a shout out to these guys who appeared on the cover of one of the most famous comic books of its day!
1--Howard Chaykin and I exchanged a few emails awhile back.
2--Walt Simonson--Emails and a Facebook friend
3--Paul Kupperberg--Facebook friend
4--Anthony Tollin--Emails
5--Paul Kirchner--Emails
6--Jack C. Harris--emails and Facebook friend
7--Bob Rozakis--Facebook friend
8--Larry Hama--Emails and Facebook friend
9--Bob McLeod--Emails and Facebook friend
10-Michael Netzer--Emails, friend and Facebook friend
11-Greg Theakston--Facebook and Netgroup friend
12-Mike Gold--Emails, Facebook and Netgroup friend
13-Neal Adams--I'm in his Facebook group
Even the late Wally Wood was in that crowd! Who knew that someday I would become a large part of his unofficial "presence" on the Web. It's a wonderful age in which we find ourselves.
When I worked at the airport, even Muhammad Ali flew in once (He's from Kentucky). Word got around quickly but I never actually saw him. Now if only Superman would fly in...
Cover lifted from SUPERMANTV.NET as my scanner remains too small to do it justice.
Posted by Booksteve at 4:44 PM