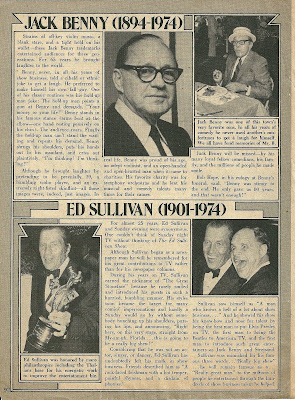 In the Fall and Winter of 1974, we lost two very important men in the history of show business. Thirty-five years ago this year Ed Sullivan died in October and Jack Benny died (at age 39 naturally) the day after Christmas. About 45 years earlier, it was newspaperman Sullivan who first put Vaudeville fiddler, emcee and all-round entertainer Benny on his radio show. Within a year, Benny started an early version of his own long-running (34 years counting radio and television) series. The stone-faced Sullivan didn't do so badly himself with a Sunday night staple TV series that lasted nearly 25 years during which time he introduced the world to both Elvis and the Beatles.
Posted by Booksteve at 9:53 AM