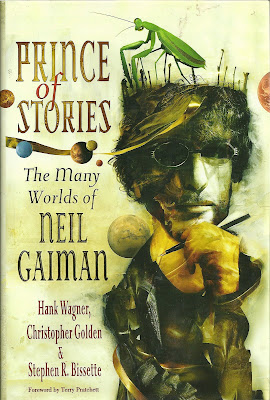 We haven't done a random book off the shelf in awhile and technically we still aren't. Today's book is one of the growing stack of books we need more bookcases for so until we get them, they're just sitting around.
PRINCE OF STORIES-THE MANY WORLDS OF NEIL GAIMAN is a 546 page 30 dollar hardcover book from late 2008 that we picked up for less than ten bucks recently at Half-Price Books. Written and compiled by critic Hank Wagner, Novelist Christpher Golden and artist Stephen R. Bissette, it is a lovingly obsessive look at every single comic, short story, novel, article, interview, film and TV show that fan-favorite New York Times Best-Selling author Neil Gaiman has ever written. It offers detailed synopses, some critical reference, lots of trivia and behind the scenes minutiae and even some new interviews and comment from Neil himself. If you don't already know or like Neil Gaiman I can't imagine you would even pick this volume up but if you do you will appreciate all the love and, if you're like me, may even be pointed to some Gaiman works you haven't yet read! Rounded out with an intro from sometime collaborator Terry Pratchett (currently my son's favorite author), a cover by Gaiman's traditional cover artist (or untraditional depending on how you look at it) Dave McKean and some wisely chosen color and black and white photos and illustrations, it's a niche item for sure but if you're a Neil Gaiman fan, you need this book! I wish many more individual authors got references like this.
Posted by Booksteve at 11:09 AM