The Misadventures of Jane 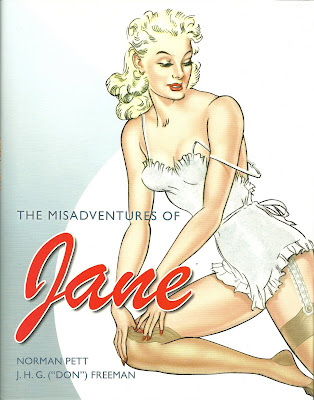 Outside of the UK, unless you're an Anglophile (like me) I'd be willing to bet that you've never heard of JANE. If you're an American comics buff of a certain age, I'd also be willing to bet that you first heard of JANE in THE PENGUIN BOOK OF COMICS (which, although it came out around the time of Batmania, had zero to do with Batman's waddling nemesis). In that volume we get one page that shpws her first strip from the early thirties, her final strip from the late fifties and, amazingly enough, an ACTUAL strip-strip from the WWII years! That's right. Unheard of in US newspapers, Jane actually appeared rather explicitly naked from time to time!

This did not go unnoticed by England's young tommies. In fact artist Norman Pett's strip (and its real-life model, the wonderfully monickered Chrystabel Leighton-Porter) became symbols of what the boys were fighting for and adorned tanks, planes and other armory. No less than Winston Churchill called Jane "a national treasure." There were movies and attempted revivals but JANE's success seems forever tied to the War years.

Britain's Titan Books recently came out with a nice history/collection of JANE for those of us who have been curious about her all these years. Why it's even being made available on this side of the Atlantic I'm not sure but Amazon has it at a nice price so I picked it up last week.

Is it good? Um...sadly, no. It's certainly interesting and the historical parts and color sections of the book are the best parts. The plots are fairly dull. Jane is a N.A.A.F.I. girl (From Wikipedia: The Navy, Army and Air Force Institutes (NAAFI) (pronounced /ˈnæfiː/) is an organisation created by the British government in 1921 to run recreational establishments needed by the British Armed Forces, and to sell goods to servicemen and their families. It runs clubs, bars, shops, supermarkets, launderettes, restaurants, cafés and other facilities on most British military bases and also canteens on board Royal Navy ships.) and as such is constantly around soldiers where she keeps getting into situations where she ends up topless, backless or in her scanties and either the reader or sometimes the other characters get to voyeuristically intrude on those moments. There are soap opera elements, some undercover intrigue and foreign relations, a funny dachshund, stock characters and way too much coincidence to take any of it seriously, especially when read in bulk in a collection such as this. The art, although salvaged from the best available sources seems muddy at times and Jane's nakedness is portrayed in complete and total innocence with never a hint of any sexuality whatsoever on her part.

The strips reprinted here are wisely from the most popular period because the earlier ones would have been of little interest and in the post-war years the whole thing was apparently given over to the romantic subplots that dominated syndicated serial strips of the time even in the US.

Conclusion: As someone whose curiosity about JANE had been stirred so many, many years ago now, I'm glad that this book was published and that I can now place the character and the strip into its deserved proper historical perspective in my head. If you're looking for a good read (or naked girls for that matter) look elsewhere.
Posted by Booksteve at 10:00 AM