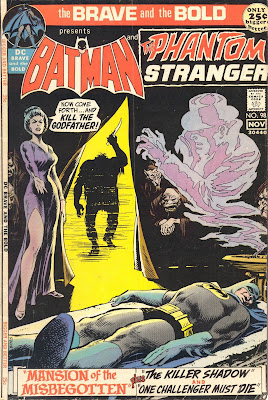 Behind this creepy Nick Cardy BRAVE AND BOLD cover (which manages to highlight the then-buzzword "Godfather") from 1971 lurks some really cool art by Jim Aparo, often described as the definitive artist for both BATMAN and THE PHANTOM STRANGER during that period. It's a shame that the story, MANSION OF THE MISBEGOTTEN is yet another "continuity be damned" classic by Bob "Zany" Haney!

In the beginning, we see Batman arriving at Birnam Towers, the great mansion home of the dying Roger Birnam, his lovely wife Clorinda and their son, Little Enoch. Roger, you see is one of Batman's oldest and best friends. NOT Bruce Wayne's mind you but Batman's. Yes, apparently the Caped Crusader used to hang out at Roger's pretty regularly. As one caption puts it, "...Batman's feet tread across old familiar floors where he'd often known happy moments."

Roger, upon seeing Batman, calls him "my oldest and 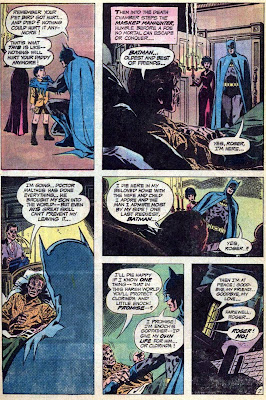 dearest friend." He makes Batman promise to take care of his wife and son---who we discover is Batman's GODSON--and then he dies. At the funeral, Batman casually notes that he was surprised he'd never met any of the other mourners. Because, as we all know, Bats was clearly hanging around with the family all the time and should know all their friends.
After the funeral, the Dark Detective tells Clorinda he has to go but that she should call him on "the bat-line" whenever she needs him. He doesn't give her the number, however, so she must already know it.

Over the next page and a half, Batman discovers the death of one of the funeral but while he's hanging aroun 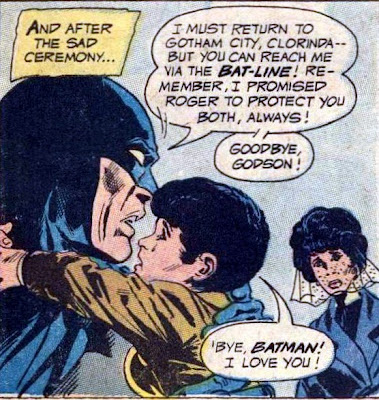 d Commissioner Gordon's office talking about the case, guess who calls him there on the "bat-line?" Yup! Clorinda! So Brucie boy (still in costume, mind you. It's like they don't even realize that mask comes off!) curls up in Gordon's chair for a long conversation. Clorinda says she's frightened about something. No details given. Batman, having sworn to protect her an 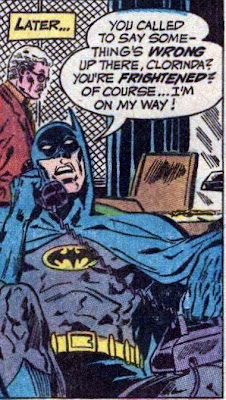 d little Enoch, drops everything immediately and heads back to Birnam Towers.

Seems a terrifying energy figure has been appearing and frightening Little Enoch. Batman gets zapped by it and then it disappears. The local Chief Constable then appears at the door to make sure everything's okay. He seems infatuated with Clorinda and jealous of the Cowled Crusader. Bats understands though, because after all, Clorinda IS "a fabulous female."

As Batman leaves, apparently having lost interest in the monster, we see him walking down the hill from the mansion. Ummm...did the Batmobile break down or what? Run out of bat-gas maybe? Anyway, whom does he meet on the road but...the energy monster! The thing points him back to the mansion where he looks through the window and sees what appears to be some sort of Satanic ritual. Like, um...yeah. They'd have time to pull that together in the time it took him to walk down the hill. He gets conked on the head and awakens inside where all seems normal again...except there are now a lot of guests everywhere!

Clorinda explains that her friends had all come to help her with her grief. One of them asks Batman for his autograph. After that---always in costume, remember!!-- Batman decides to have a bit 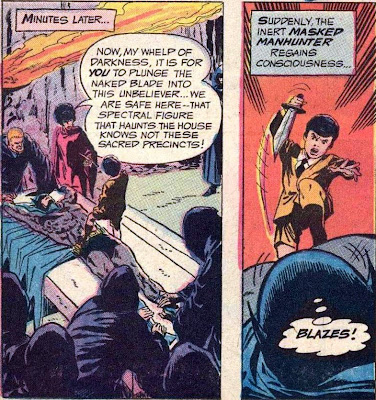 of a lie-down and Little Enoch stays to keep him company because "he adores you so."

As he drifts off, he imagines his Godson pricking him with a pitchfork only to awaken to the energy creature taking it away from him and the boy shrinking and escaping through the keyhole. WTF??!! he thinks...or would have if the expression had been invented yet and the Comics Code would have permitted it.

At that point, the groggy hero sees the energy creature turn into the nattily dressed Phantom Stranger who informs him that Clorinda and Enoch have been riding herd over "a coven of witches and warlocks!!" He also says that when he gave his autograph to the one witch, she used it to hex him. The Stranger gives him the antidote which he just happened to be able to whip up easily on site. You see, he explains, he was the energy creature, a form he took on to protect himself from just such a "hex." Never mind that his seemingly limitless paranormal powers as seen before would seem to have been enough.

Then the Stranger informs the hapless Batman that "Enoch is the evil godling they all worship." Remembering his lifelong friend, Roger (whom we've never heard of before and never will again, mind you), he thinks how terrible it was that he had married a witch and didn't know it. I don't know about you guys but I've had a number of witch friends who'd resent that remark. The pair escape but the next night Batman returns with a court order to exhume Roger's body. Why? Who know? We aren't told and it never happens anyway as it turns out the local constable is in on everything, too and our hero gets decked again, this time ending up in an abandoned quarry stretched out on a sacrificial altar. All the coven members are wearing "traditional" robes except for...yep...Enoch. The cute li'l guy is all dressed up in a little short pants suit with a tie. Awwwww! His mother refers to him as "my whelp of darkness" and entrusts him to stab Batman to death. He cheerfully makes the effort but, as The Joker, the Penguin and a th 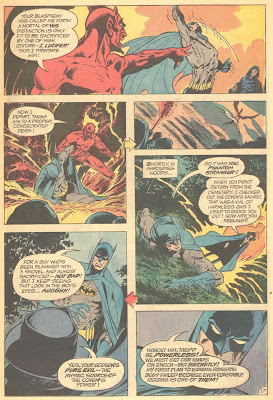 ousand others can tell ya, it ain't that easy.

That's when Satan appears. Seriously. As all educated folks know, witches and satanists are completely different things, one main difference being that witches do NOT believe in Satan! I guess these particular ones do, though, because when he claims the right to kill Batman, they let him take him away. It's okay, though, as Lucifer turns out to be our guest hero in disguise. The Stranger reveals himself and the two kidnap Enoch and take him in for tests. TESTS? He just tried to murder a super hero...twice!!

When he shows no signs of being anything but ordinary and not THE OMEN, they return to the mansion where they spot Enoch still there being toasted by his mother and the cop "on his satanic throne." Seems that while Roger had been away, his wife had twins and kept one hidden from him for what...five or six years? It's a big freakin' house, I know, but still...Tired of all this @#$!!, this time, the Caped Crusader just breaks down the windo 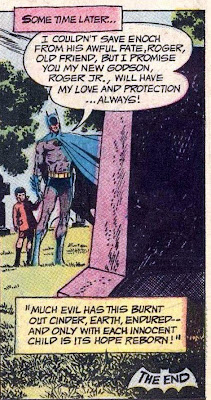 w and goes after them but mother and child attempt to escape running up the stairs. There, they're thwarted by the Phantom Stranger who "had a psychic hunch they'd try to escape" that way. A sudden vision of the late Roger Birnam appears at the top of the stairs and scares them into falling off the railing to their deaths. At least that's what it looks like but Ol' PS claims it was just the moonlight hitting Roger's portrait and reflecting her guilt about everything.

In the end we see Batman back at Roger's grave, probably apologizing for having had to break his earlier vows and now vowing to look after Roger, Jr. forevermore. Roger, Jr. who, naturally (this being a Bob Haney story) was never seen again. Perhaps he was raised alone in the West Wing of Wayne Manor? In later years he would have become yet another Robin!

In the immortal words of Oliver Wendell Douglas, "OH, MR. HANEY!!"
Posted by Booksteve at 8:03 PM