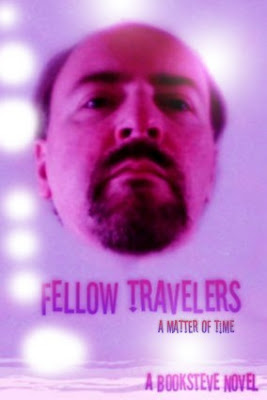 Like I needed more to do that I don't get paid for, a friend talked me into signing up for NATIONAL NOVEL WRITING MONTH, an annual event in which one challenges one's self to write a 50,000 word novel in 30 days without worrying about details such as "Is it any good?" Ray Bradbury once said something like "Writing is hard. Rewriting is much easier." Thus, the goal is to get it all out during this month and worry about correcting, editing and polishing it later (and selling it, too!). With a daily goal of just under 1700 words, I'm already a bit over 2000 and will probably get back to it here in a bit. It's a science-fiction story about a time traveler who arrives in the future thinking he's the first but quickly finding out that there have been literally thousands before him. That's all I'll say right now. Seen here is a mock cover featuring yours truly modeling as my main character (but no, it's NOT a Marty Stu novel!). There's still time to sign up yourself over at http://www.nanowrimo.org/hownanoworks

Posted by Booksteve at 4:06 PM