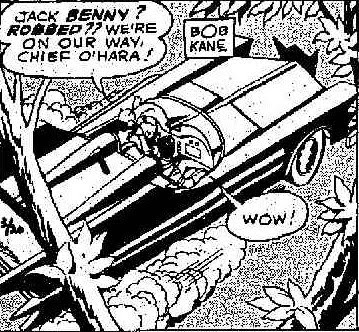 Longtime readers will recall that I'm a big fan of comedian Jack Benny. I even contributed a couple of years back to a published anthology covering different aspects of Benny's career. My piece covered Jack's 1990's comic book appearance with Batton Lash's WOLFF AND BYRD. What i didn't know at the time was that this was NOT Jack's first major comics exposure!

The beginning of 1967 saw the United States still in the grip of the preceding Spring's Batmania! TV's high camp BATMAN series was in its second season and huge stars all wanted to appear on it! Van Johnson, Tallulah Bankhead, Art Carney, Shelley Winters. Had Liberace not appeared as an evil pianist, it might not have been a surprise to see Jack Benny on BATMAN as a crooked fiddler! 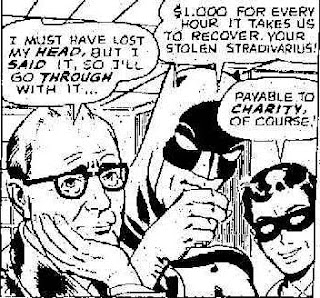 Instead, though, Jack's appearance was in another venue entirely...and has been almost completely forgotten in the years since.

Once again, let's revisit the never-reprinted, TV-based BATMAN newspaper strip from the late 1960's. Beginning in early 1967, Jack Benny was the special guest star in a seven week sequence credited on Wikipedia to writer Whitney Ellsworth and artist Joe Giella (but I seem to detect a trace of some assistance at times). 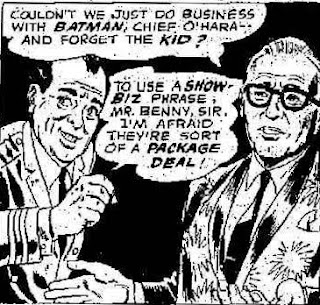 am Symphony when his rare Stradivarius is stolen by an unknown villain. In spite of Batman's protests that they don't work on commission, the Dynamic Duo agrees to take the case for $1000 dollars per hour (from cheapskate millionaire Benny!) donated to the Symphony.

The catch is that for those prices, Jack insists on tagging along to be sure they don't pad out their fee! Thus we see Jack taken blindfolded to the Batcave where the Batputer (sic) immediately and easily identifies the thief as "The Collector," a non-descript bad guy who likes the finer things in life. 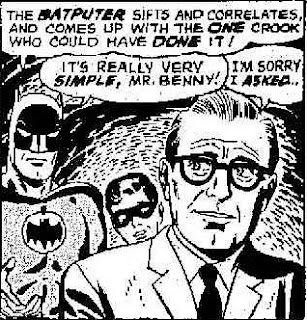 o the villain's penthouse lair. BUT!...he is expecting them with poison-tipped darts which Batman diverts with his batarang...or at least he calls it a batarang. This is followed by the ClockKing-like Collector turning loose the two vicious gorillas he just happens to have in his luxurious apartment. Gorillas, of course, are NOT known for being vicious but hey, ...

Jack manages to deal with them by unintentionally finding their funny bone and getting them laughing, leaving the arch-criminal to resort to the tried and true method of a gun. Not to worry, however, a 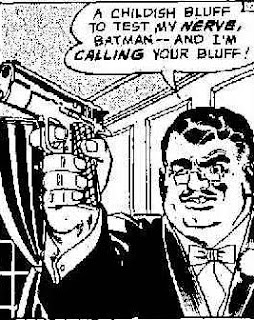 s Batman immediately recognizes that the gun has been rigged by the Collector's enemies to blow up and kill him when h tries to shoot it. It takes the Caped Crusader a few minutes to convince his foe of this but after th 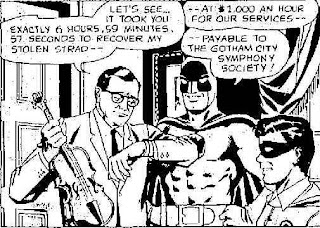 at, all's well that ends well.

With his Strad returned, Jack signs over a 7000 dollar check to Batman for the symphony. All that's left is for Robin's punchline and a brief plug for the following week's million dollar debut of...Batgirl (which I don't have...yet!)
Special Thanks to Marko in Croatia for pointing me towards these scans!