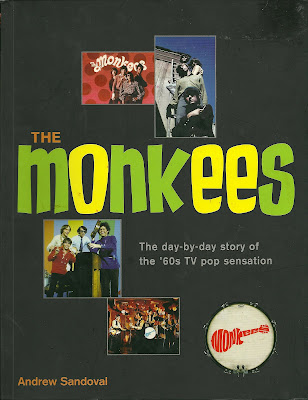 A recent trip to a more or less local Half-Price Books for bookdave's birthday netted him some goodies but I, myself, could not resist this for only ten bucks. THE MONKEES is a 2005 book that fits my very favorite category of pop culture book-totally obsessive! In the vein of Mark Lewisohn's Beatles books with their day by day listings, THE MONKEES by superfan Andrew Sandoval likewise presents a calendar-wise chronological look at the so-called "Pre-Fab Four." It's all here from little Mickey Braddock's CIRCUS BOY days to Peter and Mike's coffee house engagements and Davy's stage roles through the legendary process of assembling the group and their ensuing success and eventual fall from grace.

Anyone who says that the Monkees were NOT a real rock group needs only read the details of every single recording session or live concert appearance the four ever made to know the truth. While they may not assembled in any traditional way nor had much in common musically, they became more than just a TV show cast. It's fascinating to note here how many of those behind the scenes from critics and producers to songwriters and musicians looked down on Mike, Davy, Peter and Micky as just a necessary evil in getting the product out but through it all they came together.

The heady dates of 1967 show them at their most cohesive while 1968 shows them growing apart already. 1969 and 1970 show it all dragging out far too long with contractually new music and, even after forming his own group--the First National Band--Nesmith still hanging on as a Monkee in Kool-Aid commercials for the Saturday morning reruns of the original series!

The band's various revivals are touched on in the backmatter but if you're the kind of Monkees fan that wants to know every single little detail of what your heroes did between 1965 and 1970, this is easily the BEST of all the various Monkees books published over the past couple of decades. I'm a believer indeed!
Posted by Booksteve at 8:48 AM