Movies That Fell Through the Cracks # 58 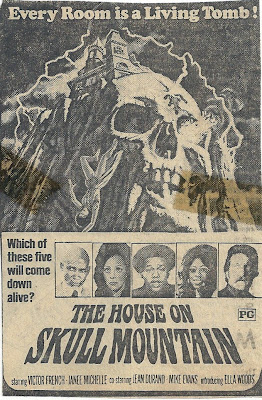 THE HOUSE ON SKULL MOUNTAIN from 1974 was just about the most generic horror film of its day. If not for the African-American angle, there would be absolutely nothing to distinguish it from dozens of grade B and lower potboiler melodramas from the 1940's through the 1950's. There's a creepy old house on a scary mountain, a dying woman with mysterious secrets, the gathering of the relatives (IE: suspects), voodoo and a series of unexplained murders.

The writer has not a single other credit in films. The director is credited as having done just about everything behind or in front of the camera...but rarely more than a handful of times. This was his sole directorial credit. The lead in this mostly black cast list is oddly given to reliable character actor Victor French, a mainstay of Michael Landon's various TV series and star of his own racially themed (but unfunny) late seventies sitcom, CARTER COUNTRY. Mike Evans from ALL IN THE FAMILY and THE JEFFERSONS is the only other familiar face. The rest of the cast are all either unknowns for whom this was their only credit or small-time character actors whose later roles included credits such as "Zombie # 3."

THE HOUSE ON SKULL MOUNTAIN is certainly not a bad film but by no one's definition is it a good one either. It's just kind of there. If you do catch it anytime soon, the memory will no doubt quickly fade.
Posted by Booksteve at 10:58 AM