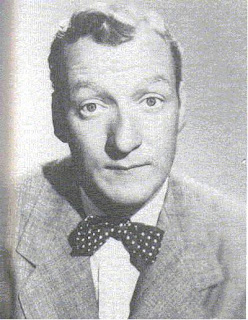 Huntz Hall
Henry "Huntz" Hall (so named because one of his many brothers thought he "looked German" even though of Irish descent) had been a professional actor all his life, literally having made his stage debut at the age of 1 in 1920. Like Leo Gorcey, he reportedly owed his casting in the original stage production of DEAD END to actor/director Martin Gabel (husband of WHAT'S MY LINE's Arlene Francis) who was himself about to appear in the play. Gabel is said to have had Hall demonstrate a machine gun-like sound effect to playwright Sidney Kingsley. When he did it better than other auditioning actors, he got the part of the gang member "Dippy."

In the early DEAD END KIDS films, he often played tough but occasionally suggested the humor that would eventually make him stand out. After the second film, CRIME SCHOOL, Gorcey and Bobby Jordan were kept on but Hall's was one of the contracts that was dropped by Warner's. He, Billy Halop, Gabe Dell and Bernard Punsly regrouped over at Universal as THE LITTLE TOUGH GUYS. 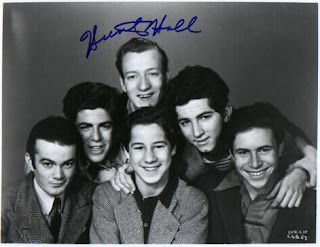 e others for their remaining DEAD END KIDS films including the classic ANGELS WITH DIRTY FACES even as the four continued on at Universal as the Little Tough Guys, The Dead End Kids AND the Little Tough Guys and later the Junior G-Men! The fact that Leo was still at Warner's was both good and bad for Hall who was able to begin to develop some of what would become the standard humor of his character and yet did not have what would become his perfect foil for it.

Eventually, with a few side trips into solo filmwork, Huntz Hall was reunited with Leo Gorcey the already established EAST SIDE KIDS at Monogram. His first few films were made while he still continued working with the "other" team at the other studio. Eventually, with Halop left behind and Punsly retiring from show business, the Universal films ended. From tha 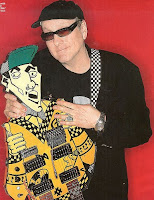 t point on the Gorcey and Hall team took off quickly. Before long, as we've stated before, the rest of the gang became superfluous.

Huntz Hall's Glimpy character affected a turned up baseball cap that would become his trademark. (It would later be adopted by indie film pioneer Ray Dennis Steckler and Cheap Trick's Rick Nielsen, both of whom openly "channeled" Huntz). In many of the EAST SIDE KIDS his buffoonish character was given spotlighted bits of co

mic business and Hall began developing a series of flutters, tics and facial peculiarities that would endear him to audiences. As the "kids" became THE BOWERY BOYS, these all continued.

In his private life, he somehow found time to serve in the military but after the war became one of the first "name" celebrities to be arrested for possession of marijuana. He also, as did Leo Gorcey, had a history of driving intoxicated.

Leo Gorcey had consolidated the power and, as part owner of the Bowery Boys franchise, stood to make good money. He knew, however, that Huntz Hall was an important part of that equation and so he, too, was given 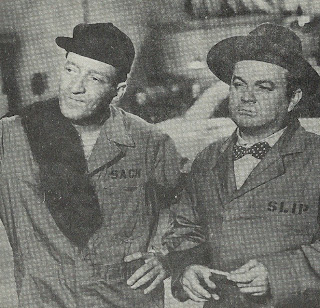 a stake in the later film series. Huntz even got top billing in the contractually obligated final films made after Gorcey suddenly retired following the mid-fifties death of his father.

After the Bowery Boys ended, Huntz Hall worked only sporadically. Even as he returned to stage work punctuated by the occasional TV guest shot, his character of Horace Debussey "Satch" Jones was becoming more popular than ever do to the gang's films being syndicated all over the country in kid-friendly time-slots. Throughout the sixties and seventies the gang's films aired regularly to high ratings on local stations throughout the country and Satch, the wide-eyed innocent, beacme a cult figure to the yonger generations! According to many sources, Hall himself was becoming richer than ever during this time as he had invested wisely in oil and gas.

At four points in the sixties, Huntz hall was teamed yet again with Leo Gorcey. The two appeared as themselves with interviewer Richard Lamparski on one of his WHATEVER HAPPENED TO... specials, they appeared as essentially Slip and Satch in the country music jamboree film, SECOND FIDDLE TO A STEEL GUITAR and as an odd amalgam of themselves and their characters in the legendarily lost (well, not entirely. I have a copy) film, THE PHYNX! 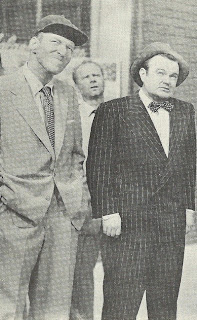 The last place the two coincided was strangely enough on the cover of the Beatles' seminal album, SGT PEPPER'S LONELY HEARTS CLUB BAND...briefly. Leo Gorcey became the only person whose image was shown who demanded to be paid. If they paid him, everyone would want recompense. Gorcey was removed leaving Huntz Hall hobnobbing with Gandhi, Sonny Liston, Oscar Wilde and James Dean on what went on to become the most recognizable album cover of them all.

In the 1970's and 1980's, Huntz Hall appeared on talk shows every once in awhile and was lured back into films for items as diverse as the drive-in T&A flick GAS PUMP GIRLS and director Ken Russell's VALENTINO. In the latter Hall seriously took on the role of movie mogul Jesse Lasky and his performance lead to talk of a possible Oscar nomination but that never occurred, perhaps because critics trounced the rest of the film. In 1979 he even tried his hand at directing.

Outside of a memorable 1980's appearance on LATE NIGHT WITH DAVID LETTERMAN, the last 20 years of Huntz Hall's life were spent relatively quietly. He was a popular guest at nostalgia gatherings where he was variously said to be nice, egotistical, mean, friendly, eccentric, paranoid, comfortable, mentally ill, stinking rich or just plain sad. Huntz Hall died in 1999.
Posted by Booksteve at 10:31 PM