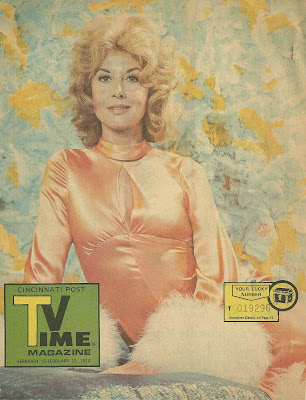 Okay, follow me. Earl Hamner, Jr. was a TV scriptwriter who, amongst other things, had written a number of generally well-received episodes of THE TWILIGHT ZONE. He had been working in Hollywood since 1953 and somewhere along the way, he wrote a novel entitled SPENCER'S MOUNTAIN which was based loosely on his own family when he was growing up. While all of this was going on, a young woman with the unlikely name of Michael Learned had returned from the European boarding schools where she had been raised while her diplomat father was stationed in Austria. She had fallen in love with the theater and, at age 17, married actor Peter Donat, nephew of actor Robert Donat (GOODBYE MISTER CHIPS, THE 39 STEPS) and the two began a successful stage career, often performing together. In 1963, Delmer Daves (A SUMMER PLACE, DESTINATION TOKYO) adapted/produced and directed the feature film SPENCER'S MOUNTAIN based on Hamner's book and starring Henry Fonda and Maureen O'Hara as the hearty couple raising a brood of kids in the mountains of Wyoming. Around the time this film was shooting, Michael Learned went virtually unnoticed in her television debut before returning to the stage she loved. Hamner had mixed feelings about the movie ostensibly inspired by his life and went on to script episodes of THE INVADERS, GENTLE BEN and NANNY AND THE PROFESSOR. In 1970 or 1971, someone had the idea to revisit SPENCER'S MOUNTAIN as a TV project. As it developed, the Spencer family of Wyoming eventually became the Walton family of Virginia and the idea was to do a special TV Christmas movie. During this period, made for TV movies were often higher quality productions than theatrical releases. Thus it was that THE HOMECOMING-A CHRISTMAS STORY, shown late in 1971, was loaded down with accolades and awards. Academy Award winning actress Patricia Neal (HUD, THE DAY THE EARTH STOOD STILL), recovering from a highly publicized series of strokes a few years earlier gave a bravura performance as the tough country mother looking out for her small army of kids while her husband is missing in a blizzard. When CBS wanted more of the family and the kids and their depression-era struggles, the parents were recast and THE WALTONS was born. Stage actress Michael Learned, age 32, was cast as mother, Olivia.
Billed initially as MISS Michael Learned to avoid the inevitable confusion about her name, she quickly managed to nearly erase the memory of the much older Neal's standard-setting performance by establishing Olivia as a tough, strong-willed but loving mother with human frailties and issues. While many looked at THE WALTONS as a throwback to simpler TV times, it was actually as cutting edge as ALL IN THE FAMILY or THE MARY TYLER MOORE SHOW in its own way.
Ms. Learned became a popular guest star on everything from talk shows and game shows to TV movies and specials, often explaining her seemingly male name, sometimes with varying explanations. She would win multiple Emmys and other awards for her role as Olivia and the popularity of THE WALTONS barely faltered season after season. While this is good for the fans it can, of course, be stifling to an actor. Thus Richard Thomas, the Hamner character in the series, left to pursue other roles. At first said to be away, his character was later re-cast until Thomas himself ultimately returned. Michael Learned also felt the squeeze and cut back her participation, eventually leaving the series. It was said that Olivia had contracted a medical condition that required her to be hospitalized elsewhere in the state. Like Thomas, however, she could not resist returning to the strong role she had created from time to time, particularly in later TV movie reunions. In the meantime, she went on to play a more contemporary role in the short-lived 1981 drama, NURSE, for which she won another Emmy. Since then, she has continued to work steadily, often in character roles as authority figures such as doctors or judges. Seen here is a lovely mid-seventies portrait of Miss Michael Learned in a way one might never think of her if one had only seen her as the dowdy matriarch of the Walton family.
Posted by Booksteve at 9:13 AM