The Invisible Man-A Marvel Hero That Never Was 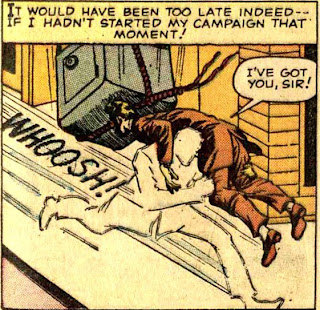 If it hadn't been for the fact that this story, "I Was the Invisible Man" appeared in a late 1958 issue of STRANGE TALES, the character might well ha

ve gone on to become yet another Marvel superhero! Yes, it's a self-contained story with a downbeat ending but hey, Ant Man started out under similar circumstances! The story deals with a scientist who finds a way of making himself...no, not invisible...super FAST! That's right. THIS guy could have been Marvel's answer to DC's Silver Age Flash! He's so super-fast that he comes across as invisible to everyone! At first, like the la 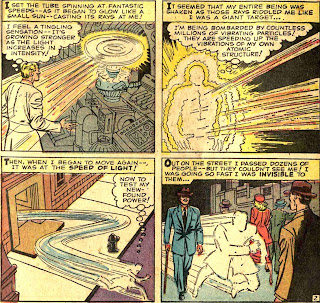 ter Spider-Man, he decided to cash in on it. Then he realizes he can use his powers for good...and still make money with them! This being a post-comics code Atlas/Marvel short story, the inevitable twist comes in the fact that his use of speed (like Tower Comics' later character Lightning) uses up his life energy, ultimately leaving him an old man. Of course a few years later, after the Fantastic Four became publicly known, he could have gone to Reed Richards for help in reversing the process and controlling 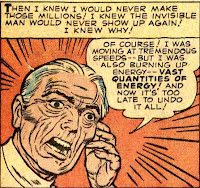 it, thus leaving the Invisible Man as a unique counterpart to the FF's Invisible Girl! Possibly he would've joined the Avengers. "Sorry, Quicksilver. We'll take your sister but we already have a speedster." Maybe even the retconned Agents of Atlas.
This story was reprinted in STRANGE TALES ANNUAL # 2 and apparently in the wonderfully named GIANT-SIZE MAN-THING # 1. GCD credits both art and script to Jack Kirby. Not sure about that last part as Kirby's scripting is usually recognizable as such.
Posted by Booksteve at 11:28 AM