Movies That Fell Through the Cracks # 52 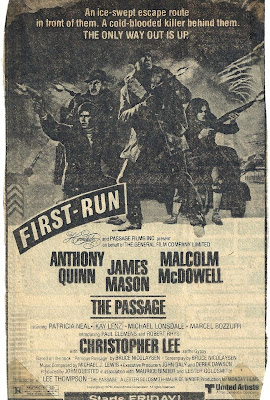 Back to 1979 again for THE PASSAGE, an under-the-radar blip of a movie that's largely forgotten even by those who saw it except for Malcolm McDowell's performance as a "Nazi Caligula." Made the same year as his performance of the real thing in Penthouse Magazine's infamous X-rated CALIGULA, the actor's performance in this one is described as brutal and nasty but also camp and over-the-top. In fact, his performance is pretty much all anyone DOES talk about when discussing THE PASSAGE. Never mind that top billing went to veterans Anthony Quinn and James Mason. It had been more than 40 years since Quinn and Mason had made their first appearances on film--a much rarer feat then than now!--and here they were still getting above the title billing! Legendary actress Patricia Neal had one of her final big screen roles here, also and Christopher Lee appeared in a change of pace as a nice guy gypsy. Don't ask me how she got involved in this but David Cassidy's wife at the time, Kay Lenz (so good in Clint Eastwood's BREEZY) appears also. The plot had something to do with Quinn trying to rescue Mason's scientist from McDowell's sadistic Nazi. The direction was by A Minus director (or maybe he should be termed B Plus) J. Lee Thompson (no relation). Thompson's earlier triumphs had included THE GUNS OF NAVARONE and two of the PLANET OF THE APES pictures but after this he descended into the hell of bad Charles Bronson vehicles.
Posted by Booksteve at 12:40 AM