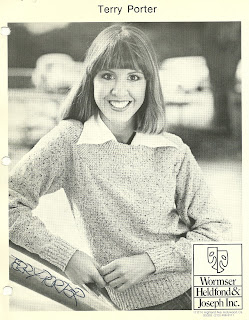 Regular readers are familiar with my oft-mentioned sixties/seventies crushes on Linda Blair, Hayley Mills, Stefanie Powers and Cisse Cameron. I believe I've even mentioned my interest in Yvonne Craig, Diana Canova, Marlo Thomas and Diana Rigg. I might even have hinted at more recent infatuations with Helen Mirren and...AHEM!...Bree Olsen. Someone I have NOT mentioned however is Ms. Terry Porter. In the late 1970's and early 1980's, Terry Porter was a familiar face in American TV commercials. The fact that I re 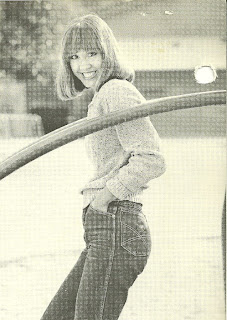 member her smile, her big, expressive eyes and her uniquely ditzy but smart delivery and can't recall one single product she advertised says a lot for her personal appeal. According to IMDB, her only acting credit around that time was an episode of HAPPY DAYS but that's incorrect. She also appeared in an episode of...CAPTAIN KANGAROO! I was flipping the TV channels very early one morning (being way too old at around 21 to actually watch the Captain's show anymore) when I saw her and ended up watching the whole thing. Her delightful performance as a friend of the dear old Captain was not only fun but, if I recall correctly, she used her real name! This--as well as the show's closing credits no doubt--finally gave me a name to put to that super-cute face. That very morning I decided to write to her in care of CAPTAIN KANGAROO. This was a trick that had worked for me several times. Write to a celeb in care of a place they don't usually get mail and you're more likely to have someone make sure they DO get it. It worked again. A few weeks later, I received a large envelope w 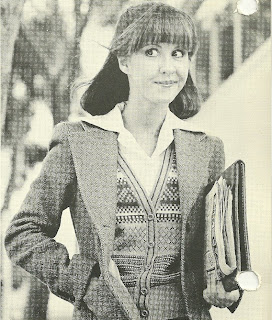 ith the enclosed pictures from her modeling portfolio. The envelope had little puppy dogs rubber-stamped all over it as did the accompanying letter. Her response (which, of course, I still have but which is misplaced at the moment) stated that my fan letter had reached her on a particularly down day and that I completely cheered her up! She went on to answer some of my questions and tell me some generic stuff about how much fun she had making the TV commercials. I got the impression she hadn't received much--if any--fan mail.
According to IMDB, Terry Porter and her husband both appeared in commercials and industrial films around that time. Her only feature film credit is HACKERS, the 199 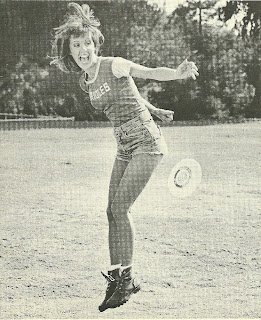 5 picture now noted as an early appearance of Angelina Jolie. In HACKERS, she plays the mother of young actor Jesse Bradford, a role with which she was intimately familiar as he is her real-life son! Bradford, although not yet a Hollywood superstar, has carved out an impressive film career and has a major role in the upcoming big-screen adaptation of Tucker Max's drunken fratboy memoirs, I HOPE THEY SERVE BEER IN HELL (which, by the way, was THE biggest selling book at the Airport Borders I managed for nearly the entire three years I was there!)
Ms. Porter, wherever you are today, thank you for being such a friendly face and thank you for writing me back that day so long ago. I've never forgotten you. I hope you have had and continue to have a happy life because just thinking about you even now makes me smile!
Posted by Booksteve at 12:35 PM