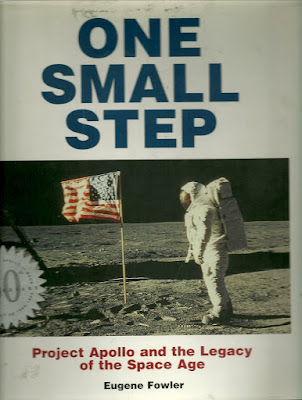 It's easy to talk about the moon landing of APOLLO 11 forty years ago this very day and forget that in a way, the entirety of the sixties led us up to that exact moment. The science fiction films of the fifties such as DESTINATION MOON became a reality when Sputnik was launched into orbit and the space race between the US and the Soviet Union began. When president Kennedy made his famous speech about landing on the moon, it was impossible for some older Americans to believe. Simply impossible. It was beyond their scope of understanding that it could ever actually be accomplished. A lot of younger Americans, however, took it to heart and throughout the sixties as the real-life space program hit its stride, pop-culture representations of astronauts and space ships were at an all-time high. There were toys such as BILLY BLASTOFF and MAJOR MATT MASON. TV astronauts were on I DREAM OF JEANNIE, IT'S ABOUT TIME and LOST IN SPACE while STAR TREK began its deep infiltration of popular consciousness. Movies such as THE ASTRONAUT and MOON ZERO TWO competed with more fanciful depictions of astronauts such as in PLANET OF THE APES and 2001: A SPACE ODYSSEY. Science Fiction novels became mainstream for the first time and in comics, THE FANTASTIC FOUR gained their powers in an attempt to be the first astronauts to land on the moon.

In real life, we were watching all the countdowns and splashdowns and ticker tape parades for Gemini and Mercury space heroes such as Col. John Glenn. The first book report I ever did in school (5th grade) was on a book entitled WHAT COL. GLENN DID ALL DAY (or something like that). When Apollo 8 actually orbited the moon at Christmas of 1968 the world seemed to just stop for a few moments when the astronauts read passages from GENESIS. If you were there you know what I mean and if not, you could never fully understand. Just for a brief few seconds in that turbulent decade, there seemed to be hope. 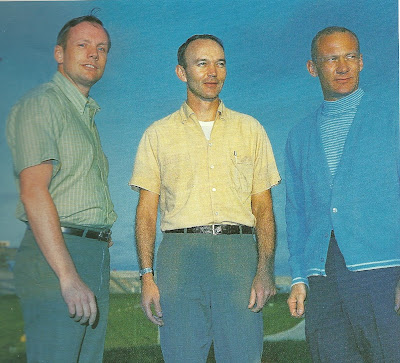 Then came Apollo 11. From liftoff, we watched every almost unbelievable moment. Walter Cronkite on CBS and Frank Reynolds on ABC were both equally fascinated as they reported it all to us in long uninterrupted news coverage that pre-empted regular TV schedules. I remember thinking it seemed like an absolutely endless amount of time before they landed and then again before Neil Armstrong stepped off the LEM and took that "giant leap for mankind." But I saw it. I SAW the first human ever step on the moon and I saw a million fantasies become reality in that moment.

After that it was all Nixon and moon rocks and space pens and Tang and the moon landings became, if you can believe it, routine. Jack Kirby and Stan Lee revisited the concept in FANTASTIC FOUR # 98 some months afte 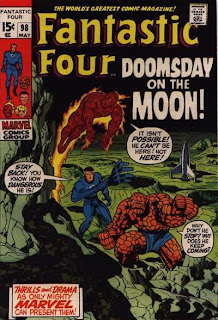 r the lunar landing. The issue found the FF actually going to the moon (where they had been several times before by that point) in order to fight a menace that threatened to prevent Apollo 11's landing! Even as a child, that made no sense. When the Red Ghost and the Human Torch had already been on the moon, what difference did it make for Neil Armstrong to go. Reality and fantasy had become one and comics would learn to steer clear of too many real world developments after that. It just didn't work.

Later still came the questioning, the conspiracy theories, the politics that kept us from returning to the moon or beyond, the admission by NASA of just how close the landing module came to crashing, astronaut Buzz Aldrin's admissions of alcoholism, Col. Armstrong's refusal to discuss the most historic moment of the century. Reality again. Maybe we've backslid. Maybe we haven't progressed as well as we'd expected. Maybe, as some say, we don't even have the technology to get to the moon today if we wanted to. None of that matters in the end because those of us who were there that day know that it happened! Those of us who were there had the best head trip the sixties ever offered!

Seen here is ONE SMALL STEP, a book put out ten years ago for the 30th anniversary of Apollo 11. Unlike most books on the moon landing, this one swaps detail for perspective and presents a lot of the pop culture influence on the space program as well as the space program's influence on pop culture. Check your local library.
Posted by Booksteve at 9:48 AM