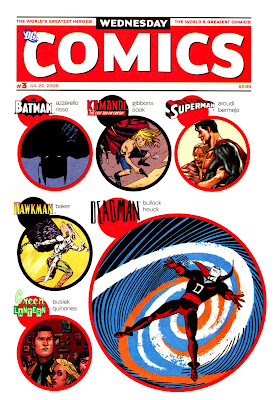 I wanted to wait a few weeks to get a handle on WEDNESDAY COMICS before I made my judgement. At this point, since this is only a 12 issue series, we are exactly a quarter of the way through and here's what I think.

First of all, the format. It's a novelty, pure and simple. When it comes right down to it, only a couple of the strips are even using it to their advantage. What matters here is the art and the stories. Here's my take:

BATMAN by Robins and Mulvihill. I don't know these guys at all and they're not doing much to convince me that I should. This is moving at a snail's pace and outside of a terrific new Bat-logo I find little reason to recommend this strip. *

KAMANDI by Dave Gibbons and Ryan Sook. In my opinion, this is the best this title has to offer. Structured like an old-fashioned FLASH GORDON or PRINCE VALIANT page, the colors are vibrant, the plot interesting and the pacing enough to keep one interested from week to week. The art itself is quite detailed. ****

SUPERMAN by Arcudi and Bermejo. Interestingly drawn in a near photographic style, I don't have a clue what's been going on here these past three weeks. *

DEADMAN by Bullock, Heuck and Stewart. More of a plot than most but still little movement. Highly stylized page design and crisp art make this one enjoyable and the writing seems to maintain the traditional version of the character. ***

GREEN LANTERN by Busiek and Quinones. A bit disappointing so far but at least it's advancing fairly quickly. Seems to be almost a spinoff of NEW FRONTIER as it's clearly set in the past well beyond current DCU continuity. Dialogue is good, art just okay. **

METAMORPHO by Gaiman and Allred. Great looking art here from the MADMAN creator but each page is a splash. Can we expect even Neil to tell a real story in a dozen splash pages (with unfunny little fanboy jokes as a bottom strip)? Knowing him, it's possible...but he should start soon if he really plans on pulling it off. **

TEEN TITANS by Berganza and Galloway. At least something's actually happening here but not enough to make me recall the plot from week to week. The dull, pseudo-anime art doesn't help either. ----

STRANGE ADVENTURES by Pope and Villarrubia. A truly ugly strip with art that reminds me of Brendan McCarthy (except that I LIKE Brendan McCarthy). This is like no version of Adam Strange you've ever seen. That said, this is one of the more memorable strips from week to week with constant action. *

SUPERGIRL by Palmiotti and Conner. The art is ultra-cute and the story's also cute but we're going on four weeks now with our heroine simply chasing the super pets. **

METAL MEN by Didio, Garcia-Lopez and Nowlan. The most traditional strip here and also the best paced plot. The characterizations are spot-on and the combination of artists is an absolute joy! ****

WONDER WOMAN by Caldwell. A frickin' mess! An ugly logo, hard to read lettering and a nearly impossible to follow layout make this strip a chore to get through every week and when you do you can't be sure what--if anything--happened. The only good thing is that Caldwell gives you no reason to care either. What a waste. ----

SGT. ROCK by the Kuberts. At least while Rock's been beaten up for three weeks in a row, the plot is moving a long a little. Kubert's style, although simplified with age as is the case with most of the great comics illustrators, still leads to an amazing bit of work that one can appreciate for both its storytelling and its art. ***

FLASH by Kerschl, Fletcher, Leigh and McCaig. This one looks like a real Sunday strip, complete with a bottom strip that ties in to it. It's the Barry Allen Flash and the story thus far, while a tad slower than you might expect from the fastest man alive, is a fun bit with both Flash and his real identity--together and separately! ***

CATWOMAN AND THE DEMON-by Simonson, Stelfreeze and Wands. A seemingly pointless combination of characters here but an intriguing, quickly moving plot and unusual art from Stelfreeze add to the fact that these creators may yet make this one a real winner. **

HAWKMAN by Baker. A new look for the character, some very interesting coloring and a lot of action right out of the gate on this one. ****

Okay, then. What's good is real good and a few others still have potential. With relatively few strips, however, I'd have to say the lesser strips are making me think twice about whether to bother sticking with WEDNESDAY COMICS. Even though the choice of strips would seem in part at least aimed at the older fan I just don't care about most of these characters. Perhaps more sadly, all of the creators, as I stated above, seem at a loss to figure out how to get me to do so.
Posted by Booksteve at 2:33 AM