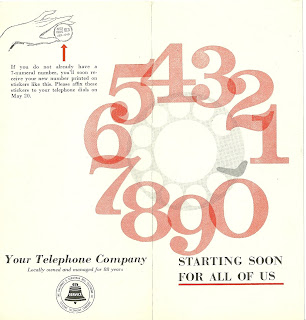 Telephones have long had a place in pop culture. Since Don Ameche invented the telephone, we've had Hitchcock's DIAL M FOR MURDER, Charles Bronson's TELEFON, the 1980 horror movie DON'T ANSWER THE PHONE right up to Miley Cyrus's supposedly racy cell phone pictures. Sometimes we forget, however, that telephone NUMBERS weren't always all number! In fact, up until the early 1960's, American telephone numbers all began with letters! The very first phone number my parents drilled into my head was HEmlock-0479. There was, for some reason, a presumed "1" after the H and

the E. What you see here is part of the telephone company's marketing efforts to ease the transition. There's no year date

on the flyer but 1962 was the only year that actually had May 20th fall on a Sunday during that decade so that must be correct for it. I don't know. In these days of pre-programmed numbers, automatic one touch dialing and all of the other conveniences this still looks complicated! No wonder my parents continued to use the letters until we finally got a new phone toward the end of the seventies that didn't have letters anymore !
Posted by Booksteve at 12:53 PM