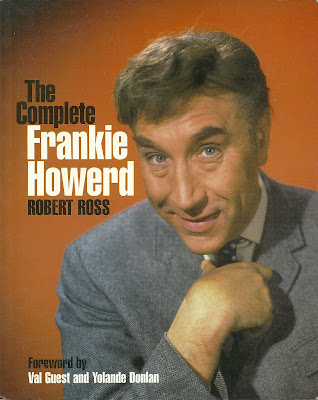 Today's book off the shelf here at the Library is THE COMPLETE FRANKIE HOWERD by Robert Ross from 2001. When Howerd was cast as Mean Mister Mustard in the now-notorious mid-seventies flop, SGT. PEPPER'S LONELY HEARTS CLUB BAND, I couldn't believe they had cast an unknown in such an all-star film. Ah, little did I know. Seems Frankie had been a star in the UK for two decades by that point and was, in fact, at a career high point after his hit television series, UP POMPEII! He had actually been in the Beatles' HELP, also, but his part ended up on the cutting room floor. He appeared only twice in CARRY ON films (and in one of the CARRY ON CHRISTMAS specials) but is also revered amongst fans of those naughty comedies.
Robert Ross, perhaps the greatest fan/defender/historian of teh CARRY ON franchise, chooses to deal in this book strictly with Frankie's career rather than his sometimes controversial and less than happy personal life. As such, it is a well done, chronological look at the various radio series, TV series, stage shows and films the beloved comedian appeared in. Living in the US, I, of course, have seen or heard very little of these other than by this point some of the movies. Nonetheless, Ross makes them interesting and one can easily chart the rise of his career as well as the various peaks and valleys. It's like reading a book on how wonderfully funny Groucho Marx is when you've only barely ever even heard of him! Afterwards, I was most definitely a fan of Frankie Howerd. Ross also did a similar book (which we have here also) on the career of Sid James and, in fact, will soon be releasing in the UK an in-depth biography of that beloved comedian whose reputation has become somewhat tarnished in retrospect. Ross promises to clear up all the confusion. We'll see.
Posted by Booksteve at 11:02 PM