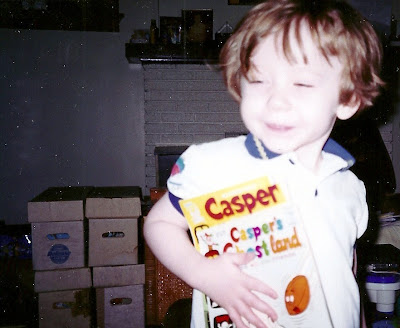 Like many folks my age it seems, I have always counted BATMAN # 180 ("Death Knocks Three Times") as the first book of my official comic book collection. Long before that, however, my dad would bring me a handful of CASPER THE FRIENDLY GHOST comics every time he would happen to see them on sale anywhere. Maybe it was because CASPER was also one of my favorite cartoon series but I've always had a special af

fection for the little guy. Turns out he turns sixty this year and Dark Horse will be celebrating later in the year with this special reprint. In the meantime, head over to Jon's Random Acts of Geekery at http://waffyjon.blogspot.com/2009/07/by-10s-friendly-ghost-casper-part-1.html to catch some CASPER by the tens! While you're there, congratulate Jon on his newly adopted daughter! Seen here is my own son about ten years ago at approximately age three proudly absconding with a couple favorite titles from my background longboxes!
Posted by Booksteve at 3:44 PM