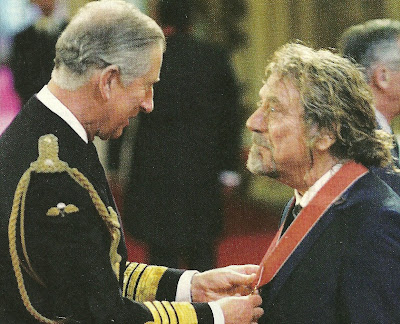 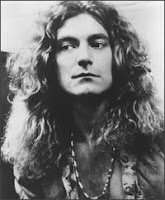 I enjoy Robert Plant's music but I don't own a lot of it. I have had the LED ZEPPELIN box set for ages and I still have a few cassettes of Zep albums but I also enjoy his eighties solo hits and some of his more recent work with Alison Krauss. Being the geek that I am I always thought he would have made a hip and cool DR. WHO back in the late seventies if the music thing hadn't worked out. Thus I find myself surprised to find the picture here in the latest ROLLING STONE (the last of my free one year subscription!). With Paul McCartney aging nicely, Mick still lookin' pretty good and dozens of other dinosaur rockers looking perfectly appropriate for their age, I just find it hard to believe that Robert Plant, the absolute image of the sleek young rock god, looks like nothing less than a homeless person here as he receives a Commander of the British Empire award from the greying but still classy-looking Prince Charles. No disrespect meant. Just an observation.
Posted by Booksteve at 1:21 AM