Movies That Fell Through the Cracks # 53 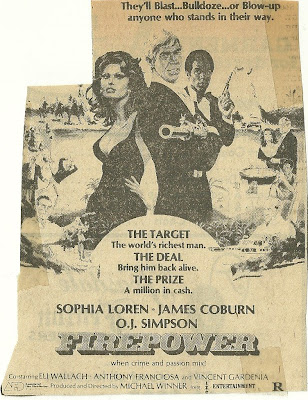 British director Michael Winner's biggest film was probably the surprise international hit (and sire of multiple terrible sequels!) DEATH WISH. His most interesting choice as a director may well have been WON TON TON-THE DOG THAT SAVED HOLLYWOOD, the all-star flop about the classic days of old Tinseltown. By 1979, however, he found himself with a mess. FIREPOWER had, according to IMDB, originally been written as a DIRTY HARRY script for Clint Eastwood, then retooled for Winner regular Charles Bronson, then on a downslide from his own international stardom. Bronson backed out and the film was almost canceled until James Coburn stepped in and the whole thing was retooled as a vehicle for his uniquely stylish film personality.

Coburn's hits were ten years behind him at that point but he had continued churning out forgettable features such as HARRY IN YOUR POCKET, THE INTERNICINE PROJECT and SKYRIDERS. While FIREPOWER certainly wasn't a better film, it was more enjoyable. Sophia Loren is out to get the ex-lover who murdered her husband. She teams with cool hitman Coburn and his sidekick (O.J. Simpson!). From there, the expected shootings, chases and explosions begin. The familiar cast includes Tony Franciosa as the "bad guy" (not that any of these characters are "good guys!") along with veterans Eli Wallach, George Grizzard, Vincent Gardenia (so good in Winner's DEATH WISH), Billy Barty and real old-timer Victor Mature (for less than a minute!). Real-life RAGING BULL boxer Jake LaMotta appears also.

Reviews were bad and it rarely turns up anywhere anymore. If one does grab it, it might most likely be to see OJ as a killer. Sigh. No one's career was really hurt but neither was anyone's career helped. Sophia was and continues to be a legend, Coburn moved into character parts and if you don't know what happened to OJ Simpson, I'll let you Google that yourself.
Posted by Booksteve at 1:25 PM